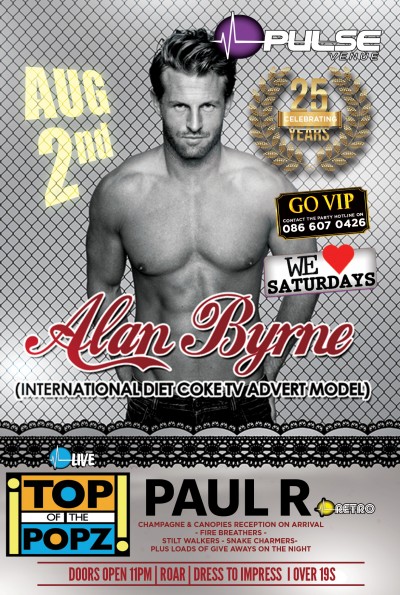 This weekend represents the 25th anniversary of The Pulse Venue, Letterkenny, and to celebrate the occasion management have decided to revert entry and drink prices to what it was when it first opened in 1989!!

Management decided to revert the prices back to 1989 as a thank you to customers for all their loyal support to the venue over the years.

It was on the 1st of August 1989 the Pulse first opened, and since then it has been one of the leaders in nightclub entertainment in the North West.

The popular venue located on the Port Road, has changed it’s name over the years and re-invented itself quite a number of times.

It was initially called Neros, then it was called the Pulse and today it’s now called Pulse Venue.

On Saturday, Diet Coke TV advert star Alan Byrne will be the special guest and the dishy model will no doubt get the females PULSES racing.

PAUL R will have all your favourites tunes playing and it promises to be a great night.

On Sunday, The Regulators will play LIVE upstairs while PAUL R will have all your favourites downstairs in the club.

It promises to be a fantastic Bank Holiday Weekend of celebration as The Pulse Venue, Letterkenny takes you back to 1989!