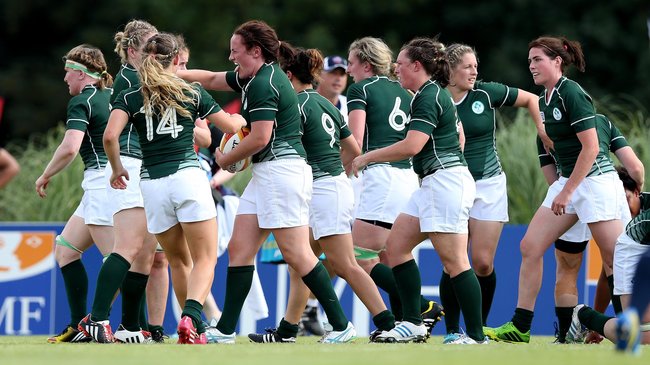 Niamh Briggs accumulated 18 points as Ireland outfought and outfoxed a physical USA team to begin the Women’s Rugby World Cup in winning style with Donegal’s Nora Stapleton putting in a great performance for the Irish in Paris.

Tries from prop Ailis Egan and star full-back Niamh Briggs sandwiched a Lynelle Kugler effort as the girls in green led 20-10 at half-time in muggy Marcoussis.

A Carmen Farmer try brought the Americans back to within three points, but Briggs’ 60th-minute penalty proved to be the last score of an end-to-end Pool B opener with another Donegal player Larissa Muldoon on the replacements bench

Although the US had won the sides’ last meeting 40-3 at the 2010 World Cup, Philip Doyle’s Ireland side have certainly kicked on since then – as evidenced by last year’s Grand Slam success.

Briggs slotted a third minute penalty to give them an early lead here, Ireland getting off to a strong start on the back of a Claire Molloy-won lineout.

But Doyle’s charges allowed the USA a foothold when they lost ruck possession near their 22 and Grace Davitt infringed at a subsequent ruck. The Americans turned down a kickable penalty and although their powerful lineout maul was stopped, flanker Kugler found space close in to score the opening try.

Kimberly Rozier converted for a 7-3 scoreline but the scores continued to come at a rapid rate, Briggs splitting the posts in the 11th minute with a penalty from a similar distance to her first.

The influence of the American set piece increased towards the end of the first quarter, but Siobhan Fleming got in to disrupt a lineout in her 22 and a follow-up choke tackle relieved the pressure.

Clean possession was at a premium with the tackle and breakdown area fiercely competitive, while a promising break by Ashleigh Baxter was well defended.

On the plus side, Ireland’s maul was beginning to look a potent weapon. The pack built momentum with three well-constructed drives, however half-backs Tania Rosser and Nora Stapleton were unable to unlock the US defence.

The Irish forwards kept pressing and a 29th minute maul – outside the American 22 – led to lock Sarah Walsh being sin-binned. Opportunity knocked from the penalty and they needed no second invitation as Sophie Spence was hauled down short before Egan, with support from her front row colleague Gillian Bourke, plunged over from the ruck.

Briggs’ successful conversion gave Ireland a 13-7 lead. The six-point buffer was a brief one though as hands in the ruck from openside Molloy earned her ten minutes in the bin and Rozier took the three points on offer.

However, Ireland struck for their second try just before the interval as turnover ball from a lineout led to strong carries from Egan and Spence, who consistently punched holes in the defence, and a final pick-up at a ruck from Briggs saw her wrestle past two American defenders for the score.

The Waterford woman converted her own try to put 10 points between the teams at the break, but again the US were quick to respond early in the second half.

Barely a minute had elapsed when American lock Farmer muscled over from a couple of metres out. Number 8 Heather O’Brien had fumbled the restart, allowing the US to build immediate pressure from a scrum. Rozier added the extras for 20-17.

Ireland’s error count increased as they coughed up ruck ball and the usually reliably Briggs let a high ball slip through her grasp, however Alison Miller did well to bring down the dangerous Vanesha McGee.

There was little between the teams in a tight third quarter. Crucially though, centre Jenny Murphy made a terrific impact off the bench with two forceful runs – the second seeing her link well with Rosser off another muscular maul from the pack.

The same attack led to USA replacement Shaina Turley picking up a yellow card close to her try-line and Briggs mopped up with a well-struck penalty right on the hour mark.

Ireland were now back in the ascendancy as Baxter and the tireless Lynne Cantwell caught full-back Meya Bizer in possession. They had a tight grip of territory as they forced hurried clearances from the Americans with 15 minutes left.

Briggs slid a drop goal attempt wide as Ireland tried to move clear by more than a converted try, entering the closing stages.

Their greater experience showed as they continued to control territory and a hard-won victory was theirs, albeit with Briggs missing a last-gasp penalty which would have denied the US their losing bonus point.

Next up for captain Fiona Coghlan and her team-mates is a fascinating first ever clash with New Zealand on Tuesday. The Black Ferns, who are the defending champions, overwhelmed Kazakhstan 79-5 earlier today.

Said Coghlan: “There are aspects we need to improve on and we’ll look at that going into the New Zealand game.

“But I think when you’re down, the ability to come back, go down and again and come back, that shows what this team is made of and the character that’s in the team.

“Particularly in the last 10-15 minutes, we were all on the same page and everyone knew what we had to do in order to get the win. We’ll take great heart from this win.”