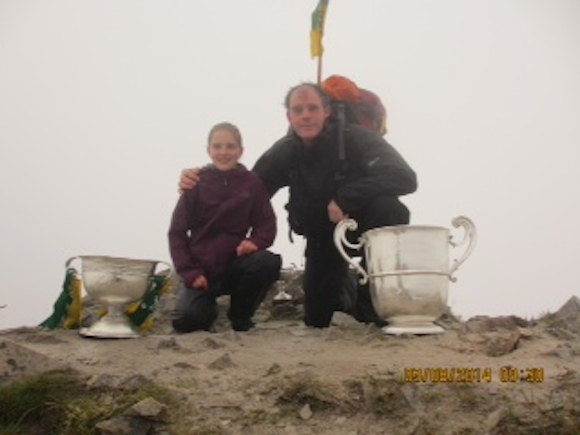 Anraí and Grainne on top of Errigal

His mission was to carry both cups to the summit for the first time, to honour and celebrate the outstanding achievements of Donegal Senior and Minor Teams on this Historic occasion and to conclude the Successful Errigal 1000 event in aid if DMRT.

Anraí played under age with Annagry N.S & Naomh Muire GAA in the Rosses. He played Gaelic football and hurling with the defence forces while based in Kildare over the years and his family are all members of St. Eunans GAA , Letterkenny.

Anraí was accompanied by his daughter Gráinne (with her Ulster Cup for u-12 double of recent Ulster Fleadh in sean – nós singing), Irish Actor Niall Mac Eachmharcaigh from Ranafast and Gavin Ó Dónaill, O’Donnells shop, Crolly – they also reached the summit the day before during the Errigal 1000.

As they approached the summit, Niall whistled the tune of Ó’ Donnell Abú, the notes resonated through the mist to make a fitting ceremony at the summit.

Anraí wishes to thank Donegal GAA County Board and Chairman for making the cups available to give this High Honour to both teams on this special occasion.