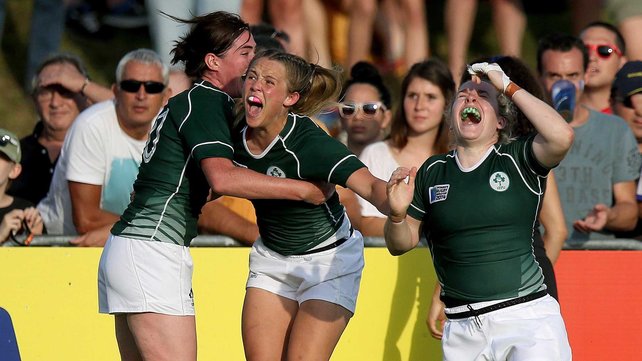 Nora celebrates with her team mates at the final whistle

DONEGAL’S Nora Stapleton played a key role as Ireland’s women rugby team beat the All Blacks 17-14 in the Rugby World Cup in France – almost certainly guaranteeing them a place in the semi-finals.

Tries in each half from Heather O’Brien and Alison Miller saw the girls in green achieve an historic win over the four-time World Cup winners, with Ireland men’s head coach Joe Schmidt and out-half Jonathan Sexton both in attendance in Marcoussis.

The Black Ferns, who boasted a 20-match unbeaten World Cup run since the 1991 semi-finals, led 8-7 at half-time thanks to a Selica Winiata try against the run of play.

Kelly Brazier’s second penalty of the evening extended their advantage to 11-7, but Philip Doyle’s charges defended doggedly in a tight third quarter and Niamh Briggs countered brilliantly to create Miller’s lung-busting score on the hour mark.

Briggs followed up with a stunning conversion from the touchline and although Brazier managed to bring New Zealand level at 14-all, a final penalty from Briggs with 10 minutes left was enough to seal a stunning victory.

Their second successive triumph in Pool B means Ireland are on course to reach the semi-finals for the first time. They will aim to book that place in the last-four when they play Kazakhstan on Saturday afternoon.

And it may just have some way to go!