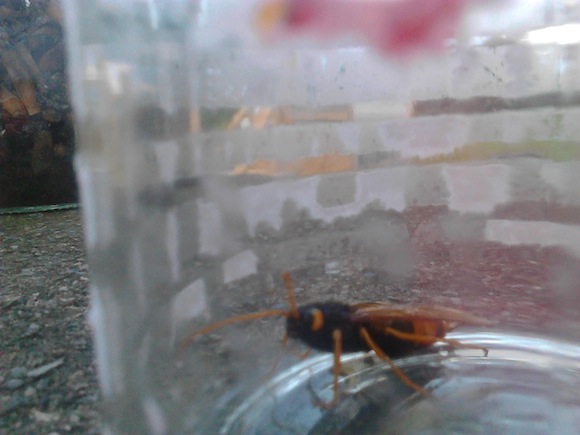 FAMILY CONTACT AUTHORITIES AFTER DISCOVERY OF HORNET IN DONEGAL GARDEN

The hornet found yesterday in Carndonagh.

A Donegal couple have contacted the Gardai and the Department of Agriculture after discovering a large hornet in their back garden.

The shocked couple from Carndonagh made the discovery yesterday.

They fear the hornet may be an Asian Hornet which has been responsible for the deaths of a number of people on the continent in recent weeks.

Worried Sharlene Forbes said she contacted local Gardai when they managed to trap the hornet.

“We are obviously concerned because these bugs are a great threat to our bees and to us as the venom dissolves the tissue and cause renal failure resulting in death.”

Gardai have now been in touch with local wildlife rangers and the couple have now been advised to contact the Department of Agriculture.

Sharlene says they have ben comparing the hornet they caught in their garden and the recent reports of Asian Hornets and claims they are identical.

So far there have been no reports of Asian Hornets in Ireland.

The creature may be a wood wasp as suggested by others but the discovery has led to worry.

People have posted on Facebook about an increase in stings from similar creatures across Donegal in recent weeks.