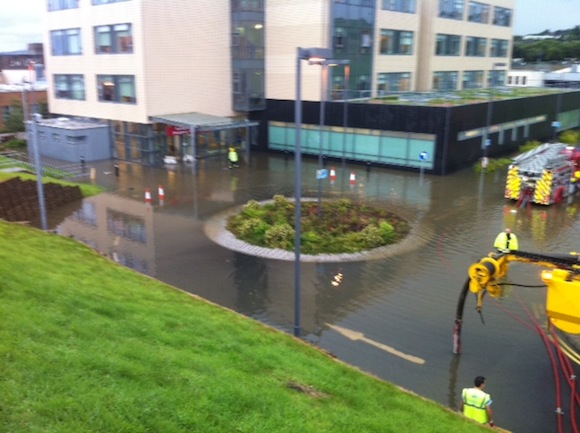 BREAKING NEWS: HOSPITAL BACK IN OPERATION – MANAGER APOLOGISES TO PUBLIC

BREAKING NEWS: The Emergency Department at Letterkenny General Hospital is back in operation.

A clean up was completed in the reception and administrative areas that had experienced a very low level of flooding due to water leaking into these areas following torrential rain in the Letterkenny area earlier in the evening, said the HSE.

The hospital’s ED went off call for three hours from 8pm to 11pm to expedite the clean up.

Clinical areas in the ED and hospital services in general were not affected, said the hospital.

Flooding in the roadway and car park has partly abated and people are advised to use extreme caution if coming to the ED.

The emergency services remain at the scene in anticipation of more heavy rainfall.

An investigation into the cause of the flood has already started.

Seán Murphy, General Manager, Letterkenny General Hospital, stated: “I want to acknowledge the hospital staff, the ambulance service, the staff at Sligo Regional and Altagelvin Hospitals, our local GPs, the fire service, the council and the Gardaí for their cooperation.

“We regret any inconvenience caused to patients and their families.

“Although services are now back to normal, we would like to remind the public to keep the Emergency Department for emergencies and to contact their GP or GP Out of Hours services in the first instance.

“We would also like to remind people that visiting the Short Stay Ward in the hospital has been suspended for the time being due to cases of norovirus on the ward.

“If relatives are concerned about patients on this ward, a nominated person from each family can liaise with the Clinical Nurse Manager on the ward regarding planned visiting. The contact number is 074 912 5888, extension 4084.

“People who have vomiting and diarrhoea symptoms should not attend the hospital but should contact their GP in the first instance if they have serious concerns. We would like to thank patients and the public for their cooperation.”

Under 35s should be excluded from next...