Donegal is due to welcome the Palestinian ambassadors to Ireland on Thursday 14th August as a number of events are planned in conjunction with their visit. 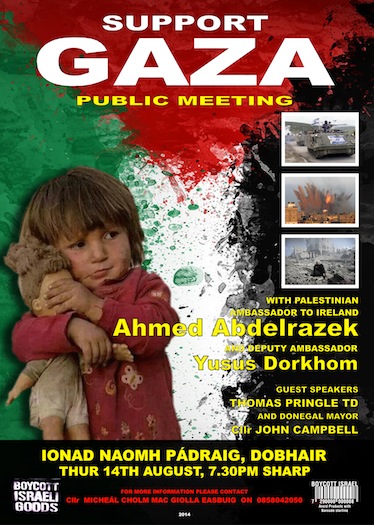 At a county council meeting on July 31st Donegal County Council supported a call to have the Israeli Ambassador to Ireland expelled in the wake of the Israeli bombardment of the Gaza strip.

At the same meeting the council voted to officially welcome Ambassador Ahmad Abdelrazek and his deputy Yunus Dorkman to the county when they visit in August for a public meeting about the ongoing crisis in Gaza.

The public meeting, which has been organised by Councillor Micheál Cholm Mac Giolla Easbuig, will be held in the Rosses in Ionad Naomh Padraig, Dore at 7.30pm on the evening of August 14thand will feature guest speakers Thomas Pringle TD and Donegal County Mayor Councillor John Campbell.

Speaking of the public meeting to be held with the Palestinian Ambassadors Cllr Mac Giolla Easbuig said it was important for people to both get informed on the day and also to show their support for the Palestinian people.

“I have long had a connection to the plight Palestinian people and have had a long term relationship with the Palestinian embassy over the years because of it” Cllr Mac Giolla Easbuig said.

“I have visited Palestine in the past and I have a strong affiliation with is people and their daily suffering of brutal occupation by the Israeli government. This latest slaughter of the people of Gaza and the near destruction of the Gaza strip itself moved me to organise this upcoming meeting.

“We held a similar meeting in Dore following the last major attack on the people of Gaza back in 2009 and I didn’t think then we would be back here again. But sadly the Palestinian people continue to be oppressed and in Gaza there are 1.8million people basically living in an open air prison smaller than Inishowen. Now they also have to endure being under heavy bombardment from the worlds forth most powerful army and all its military might.”

Speaking of the current situation in Gaza Mr Mac Giolla Easbuig said that there is massive support for the Palestinian people here in Donegal which he very much welcomed.

“The massacre of so many innocent people by the Israelis in the last few weeks has enraged so many people here in Donegal,” he said. “But despite a lot of media trying to stifle the reality of how disproportionate and unjust the Israeli army’s actions have been, it is quite clear the people here are doing all they can to inform themselves and take action in whatever way they can.

“There has been a growing support of Boycott, Divestment and Sanctions against Israel and many people are now boycotting Israel by not purchasing Israeli goods in the shops. Already we have supermarkets in Gweedore and Dungloe refusing to sell Israeli goods which is a very welcome development. And with our county council supporting a call for the Israeli Ambassador to be expelled from Ireland it seems the people of Donegal are sending a strong message to Israel of their disgust at the Israeli treatment of the Palestinian people.”

Calling for people to continue their support Councillor Mac Giolla Easbuig said attending the public meeting on the 14th of August in Dore would be both informative and an opportunity to send a warm message of support to the people of Gaza.

“It would be great to see a large turnout for this public meeting for it would be a great opportunity for us as a people to send a message of support and solidarity from Donegal to the people of Gaza through their Ambassador. It will let them know how much we sympathise with them as they continue endure such hardship in the face of this brutal attack and massacre. At the very least if the people of Gaza know other people in the world stand with them it will give them hope for the future.”