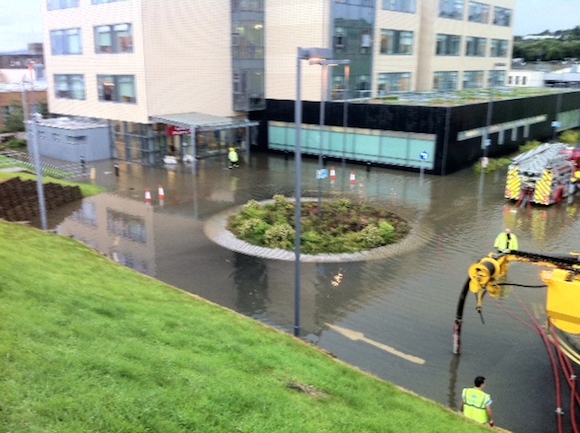 An investigation has started into the flooding at Letterkenny General Hospital last night following torrential rain with the hospital manager Sean Murphy insisting: “I want to know what happened.”

The road and hospital car park adjacent to the Emergency Department (ED) became flooded and a low level of water leaked into the ED’s reception and administrative areas. The hospital’s ED went off call for three hours from 8pm to 11pm to expedite the clean up after which services returned to normal.

Clinical areas in the ED and hospital services in general were not affected.

“The investigation is obviously at a very early stage but the culvert was not blocked,” said SeanMurphy.

“Last year (on July 26) the main cause of the flooding incident was the fact that the screens became blocked and prevented water from entering the culvert causing the Sprackburn Tributary to overflow, wiping out 40% of the floor space of LGH and eliminating more than 70% of the hospital’s capacity at that time. Last night’s damage was considerably less that last year’s and the ED was re-opened after three hours with no other hospital services affected.

“There are already improved interim flood management arrangements in place at Letterkenny General Hospital with additional CCTV monitoring and regular inspection of flows and levels in the stream. This also includes the location of a digger onsite and access on a 24-hour basis to a roster of drivers to provide rapid emergency response, as required by the hospital’s insurers.

“The West / North West Hospitals Group has been granted planning permission from Donegal County Council for the construction of a new storm flow routing pipe and associated works at Letterkenny General Hospital (LGH).

“Site works have commenced and are scheduled for completion in autumn 2014. The flood management works, including the new culvert, are estimated to cost approximately €1m.

“As stated, our investigation is at an early stage. It appears that the interim flood management measures worked well as the culvert was kept clear and other steps such as sandbagging of vulnerable areas were put into place.

“We are not going to speculate as to what these findings will be. We will publish the result of the investigation as soon as is feasible. More than anyone else in Donegal, we want answers.

“I want to acknowledge the hospital staff, the ambulance service, the staff at Sligo Regional and Altagelvin Hospitals, our local GPs, the fire service, the council and the Gardaí for their cooperation.

“We regret any inconvenience caused to patients and their families.”