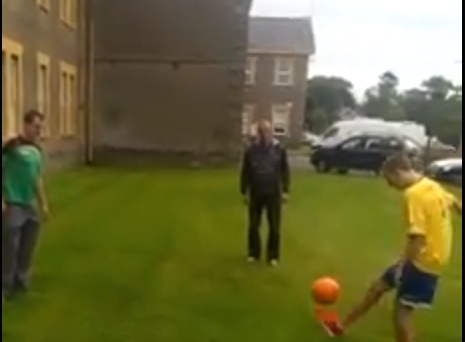 Oisin with Michael and Neil

HE’S already stunned medical experts with his incredible recovery from a coma.

And now Oisin Merritt, the young Finn Harps player injured in a fall in Spain in June, has shown he hasn’t lost his football skills.

Donegal GAA captain Michael Murphy and Neil Gallagher have called in to see Oisin as he continues his rehabilitation at the St Conal’s Campus of Letterkenny hospital.

And Oisin showed he hasn’t lost his silky soccer skills as he had a kick about – Glenswilly duo Murphy and Gallagher weren’t too bad either.

Doctors are still very pleased with Oisin’s progress after he spent a month in a coma and returned to Donegal last week.

And tonight Oisin said he was “absolutely buzzing” after being told he can go home for the weekend.

“Got great news the doctors, they said I have made a remarkable improvement and have allowed me to go home for the weekend,” he said.

As for his kick about with the GAA stars, the Finn Harps youngster from Stranorlar said he was “chilling with the men.”

And he will of course be supporting the Donegal stars as they take on Armagh in the All-Ireland Quarter Final at Croke Park on Saturday.

Oisin, in his Brazil top, does some juggling

DONEGAL STARS POP INTO HOSPITAL FOR GAME OF FOOTIE WITH OISIN MERRITT was last modified: August 8th, 2014 by John2