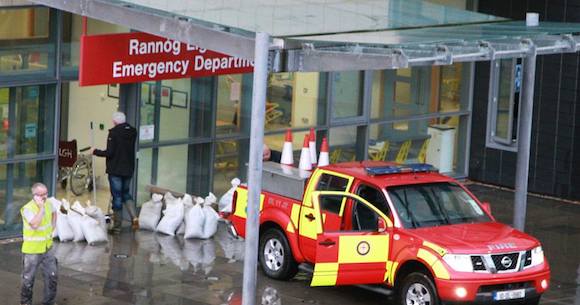 NEW DRAINAGE TRENCH TO BE DUG AT HOSPITAL AFTER FLOOD FIASCO 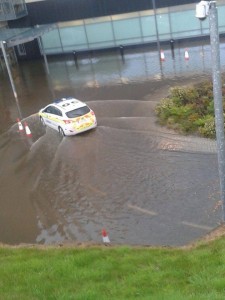 LETTERKENNY General Hospital management has admitted that more anti-flood measures are now needed at the site – on top of those already underway – with a new drainage trench said to be dug.

In a statement this evening HSE West said cleaning up the mess from Tuesday is now complete.

A clean up was completed on the night itself in the reception and administrative areas that had experienced a very low level of flooding following torrential rain in the Letterkenny area. Clinical areas in the ED and hospital services in general were not affected.

The external cleanup is now complete.

“An estimate of costs of flood damage at LGH has not been finalised. However, we do not expect these costs to be very substantial as there was minimal damage to the fabric of the facility and the principle costs relate to the response to the incident (drainage of flood water and clean up),” said the hospital in a statement.

“The investigation commenced immediately and is ongoing, lead by HSE Estates.”

It went on: “The investigation is currently focused on identifying as a matter of urgency what remedial action needs to be taken to prevent a recurrence of this flooding problem.

“We have already committed to publishing the results of the investigation and we will produce an interim report in the first week in September with a final report to be published in October.

“There are already improved interim flood management arrangements in place at Letterkenny General Hospital with additional CCTV monitoring and regular inspection of flows and levels in the stream.

“This also includes the location of a digger onsite and access on a 24-hour basis to a roster of drivers to provide rapid emergency response, as required by the hospitals insurers.

“It appears that these interim flood management measures worked well as the culvert was kept clear and other steps such as sandbagging of vulnerable areas were put into place. The onsite digger played an important role in moving sandbags into place on the night of the flood.”

Admitting that new works are now needed, the statement went on: “Further arrangements that have been put in place in response to last Tuesday’s incident include the creation of a drainage trench to intercept surface water run off from outside our boundaries and the stationing of a vehicle with pumping facilities in the car park (at no charge to the hospital) whilst a suitable flood pump is procured. Additional measures continue to be evaluated in consultation with HSE Estates and Tobin Consultant Engineers.

“Site works have commenced for the construction of a new storm flow routing pipe and associated works at Letterkenny General Hospital and are scheduled for completion in autumn 2014. The flood management works, including the new culvert, are estimated to cost approximately €1m

“The flood management strategy will be reviewed in light of the findings of the investigation and will be updated accordingly to take into account any new developments.”

NEW DRAINAGE TRENCH TO BE DUG AT HOSPITAL AFTER FLOOD FIASCO was last modified: August 8th, 2014 by John2
Tags:
floodhospitalHSEletterkenny