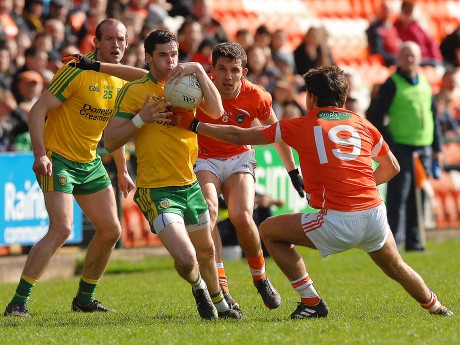 DONEGAL LEAVE IT LATE… BUT WE’RE HEADING BACK TO CROKER

The Ulster champions had to come from behind on two occasions and it took two late, late points to earn Jim McGuinness’s side a semi-final date with  either Dublin or Monaghan.

Michael Murphy gave Donegal the lead in the third minute, putting a free over the bar from 30 yards.

The game threatened to boil over in the 10th minute as players and officials got involved in a “bit of handbags” in front of “Hill 16” during which the Donegal team doctor was pushed to the ground.

When the game restarted after a two-minute delay, Aaron Kernan put a free over the bar to put Armagh in front for the first time.

Wing forward Aiden Forker extended the Armagh lead when he floated over a lovely point in the 20th minute and the same player should have scored again a minute later but he put his shot wide when in a good possession.

The game burst into life in the 22nd minute when  MacNiallais found the bottom corner of the Armagh net for his first ever championship goal to put Donegal into a one point lead on a scoreline of 1-01 to 0-03.

However, the lead last only lasted three minutes as first, Stefan Campbell and then Andy Mallon put the Orchard County back in front.

A brilliant free swung in from distance by Michael Murphy brought the Tir Chonaill county back on level terms a minute later and he put over another to put Donegal back in front with five minutes of the half remaining.

Full-back Neil McGee pushed up to double the advantage with an excellent score before Armagh’s Kyle Carragher put over the bar to reduce the deficit to a single point.

Following another “handbag” confrontation between the players in the Armagh goalmouth, Michael Murphy put over another free to send Donegal in at half-time with a two-point advantage on a scoreline of 1-05 to 0-06.

A McFadden point in between two Tony Kernan scores saw Donegal lead by a single point after ten minutes of the second half.

Scores from McFadden and Patrick McBrearty put three points between the sides for the first time before Aaron Kernan brought in back to two on the 48 minute mark.

A brilliant long-distance free by Michael Murphy, making his 42nd Championship appearance, put three between the sides again in the 55th minute.

Tony Kernan put over a brilliant point in the 58th minute to reduce the deficit before the lucky goal put the Orchard County in front- a Campbell palmed effort came back off the post and struck the heel of goalkeeper Paul Durcan to trickle into the back of the net for a rare own goal in Gaelic football.

Playing a captain’s role, Murphy put over a point from play to level the scores with two minutes remaining before McBrearty pointed a minute later.

Tony Kernan had two chances to level the scores in injury time but both his frees from distance failed to reach their target and were cleared by the Donegal defence.

DONEGAL LEAVE IT LATE… BUT WE’RE HEADING BACK TO CROKER was last modified: August 9th, 2014 by johngerard