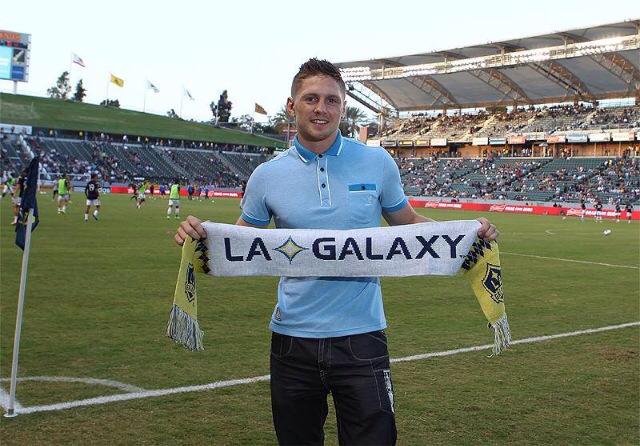 GOLDEN BOY JASON QUIGLEY IS ON A DIFFERENT GALAXY

Jason Quigley took some timeout from preparing for his second professional bout next week, by being a guest of honour at a recent LA Galaxy match.

Quigley fights next Saturday night at the StubHub Center, Carson, California, although his opponent has not yet been announced.

Quigley said it was an absolute pleasure to be a special guest at the match, and said it was great to meet the fans and the young kids who were there prior to the fixture against San Jose Earthquakes.

Irish soccer fans will be familiar with LA Galaxy as Irish soccer legend Robbie Keane currently leads the attack for the MLS side.

While David Beckham also spent five seasons there after leaving Real Madrid in 2007.

Quigley posted on his Facebook timeline, “Great night at the LA Galaxy Game at the stub hub center here in LA.

“Really enjoyed meeting the fans and young kids, was a pleasure to be a special guest, this day week I’ll be ready do my business in this amazing venue in my 2nd Pro Fight , ‪#‎Ready‬ ‪#‎Aug16‬ ‪#‎TeamQuigley‬ ‪#‎GoldenBoy‬ ‪#‎SheerSportsMGMT‬ #%