MAN AIRLIFTED TO HOSPITAL AFTER SUFFERING HEART ATTACK ON STREET

A man in his sixties was airlifted from Dungloe this evening after suffering a heart attack. 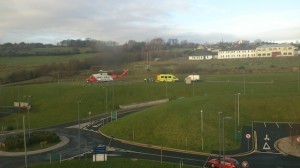 It is understood the man was in the Main Street area when he suffered the seizure.

He was attended to by ambulance personnel who requested assistance from Malin Head Coast Guard to task the Rescue 118 chopper.

The patient was taken to a nearby football pitch at the shore front from where he was airlifted to Letterkenny General Hospital.