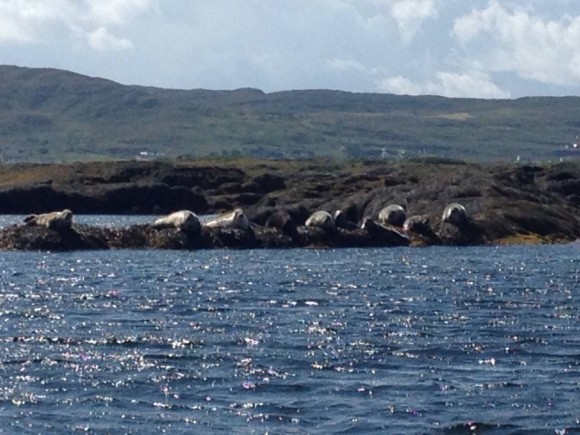 NO SIGN OF SNOWBALL AS OTHER SEALS ENJOY THE GLORIOUS SUNSHINE

The seals enjoy the glorious sunshine in Dungloe Bay earlier this afternoon but no sign of Snowball. Picture by Danny Breslin.

Snowball the seal waves as Danny takes his photo a few weeks ago.

A forthnight ago, Danny was fishing around Dungloe Bay, when he spotted an unusual looking all-white seal relaxing with another seal on the rocks.

As Danny took the snap Snowball waved at the popular local fisherman.

Danny then affectionately nicknamed the seal ‘Snowball’ because of his all white appearance.

While working earlier today, Danny got the great snap (above) of ten seals relaxing on the rocks and enjoying the glorious sunshine.

However he was a little disappointed not to see Snowball.

It’s believed Snowball was absent because he travelled to Croke Park earlier this afternoon to see Patrick McBrearty score a late point to SEAL a famous Donegal win.

NO SIGN OF SNOWBALL AS OTHER SEALS ENJOY THE GLORIOUS SUNSHINE was last modified: August 9th, 2014 by Mark Forker