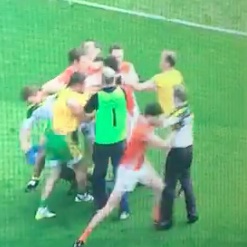 ARMAGH player Aaron Findon has called Donegal team doctor Dr Kevin Moran to apologise for the attack which left the medic on the ground at Croke Park.

The incident – part of a series of ‘sledging’ incidents – marred Donegal’s clash with the Orchard County on Sunday.

Donegal Daily columnist Cathal Mac Suibhne described the Armagh tactics as “childish” – remarking that one incident at half-time when Armagh players launched an unprovoked verbal assault on Karl Lacey was typical of some of the Armagh behaviour.

One skirmish started by Armagh during the match – broadcast to Britain on Sky Sports – lasted two minutes.

Findon was yellow carded for the incident involving Dr Moran.

We now understand that Findon has apologised now TWICE for the incident amid reports he may face further action from GAA HQ at Croke Park.

The apology has been accepted. The pushing incident has sparked a national debate – not least between pundit Joe Brolly and RTE’s Des Cahill, with the latter slamming the Derry man for his ‘belittling’ of the incident.

Donegal squeezed past Armagh by a point in a thrilling encounter at Croke Park.

Thankfully no Donegal players responded to the ‘sledging’ by the Armagh players.