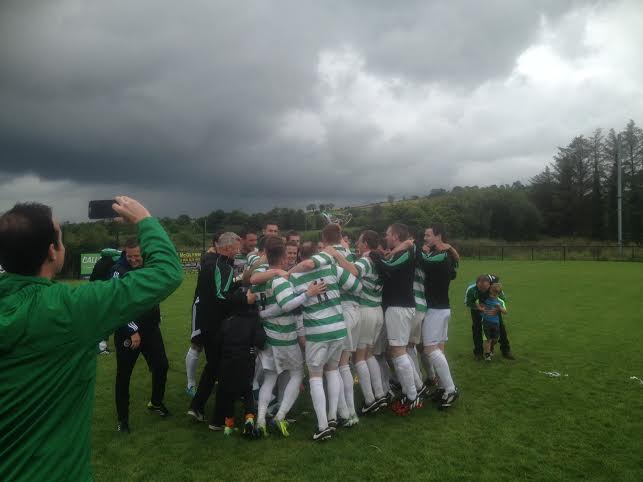 Cockhill Celtic were crowned 2014 Ulster Senior League champions after having to come from behind twice to eventually defeat Letterkenny Rovers 3-2 at Leckview Park.

Cockhill went into the game knowing a win would secure title glory but that victory seemed like a million miles away when Rovers took the lead after only ten minutes. A free kick from the left hand side was whipped in by Neil Lloyd and it found David Shovlin and his cute header deceived Gavin Cullen to put the hosts ahead. The visitors responded well and equalised on 21 minutes. Oisin McColgan with an incisive pass found Garbhan Friel and as he attempted to round Rovers defender John Doherty, referee Stephen Toner adjudged that Doherty had handled the ball. Friel made no mistake from the penalty spot slotting it past Jason Quinn in the Rovers goal with ease. Cockhill had a glorious chance to go in front on 27 minutes when Derek Doherty capitalised on a mistake by Aaron O’Hagan. Doherty played a ball through to Conor Carlin who tried to place his shot low into the corner but the ball hit Jason Quinn who managed to retreat and gather the ball. Rovers never really tested the Cockhill defence but regained the lead on 37 minutes. Stevie Okakpo raced on to along through ball and was bundled over unnecessarily by Gavin Cullen just inside the box. Darren McElwaine stepped up and scored his second penalty in week past Cullen to ensure Rovers held a 2-1 advantage at half time.

Rovers were intent on spoiling the title party and should have put the game beyond doubt two minutes into the second half. Stevie Okakpo mishit an effort while well placed and Johnny Bonner should have done better at the far post but shot wide after a McElwaine cross to the far post. This seemed to be a turning point as Cockhill went straight up the pitch to equalise on 49 minutes. A wonderful cross from Gerry Gill found Garbhan Friel and his looping header went over Quinn to the sound of huge cheers from the large army of away supporters. Indeed they didnt have to wait too long before what turned out to be the League winning goal arrived just 3 minutes later. A corner from Gerry Gill found Friel at the near post and the ball seemed to come off his knee and bounced into the ground and into the net to spark off scenes of wild celebration from the Cockhill faithful. The Inishowen men did have chances to extend their lead with Conor Carlin again guilty on 68 minutes. A long kick out from Cullen was expertly taken down by the former Drumkeen man and he had plenty of time but somehow his lob over Quinn went just over. Letterkenny did have a couple of chances to equalise with a Johnny Bonner rasper bring a top notch save from Cullen while a John Doherty header also caused some panic in the Cockhill defence as time was running out while James Bradley should have done better for the visitors but blazed high and wide on 87 minutes

When referee Stephen Toner who was excellent throughout blew the final whistle it sparked scenes of jubilation and ensured that Cockhill defended their title with a game to spare. Celtic are back at Leckview next Saturday when they play Swilly Rovers in the League cup final and are attempting to win the double double having also won both competitions in 2013

Bonagee started brightly with Kevin Barr having a few attempts on goal that were well saved by Shaun Patton. Dean McConnell & Darragh Black had good efforts for Harps that were well saved by the Bonagee keeper. Frankie McBrearty put the away side in front 20mins in as he finished low in to the bottom corner. Ryan McFadden doubled the lead in the 40th min as he headed home from a free kick. The second half was open with both sides having numerous efforts on goal and Harps got back in to the game in the 71st minute as Jack Dean finished well after a great through ball from Jordan Loftus. Loftus then had a free kick come back off the crossbar as Harps pushed for the equaliser, but the Bonagee men held out for the victory.

Letterkenny Rovers advanced to the final of the reserve league cup and a meeting with local neighbours Bonagee Utd following a comfortable 5-1 victory over Fanad Utd at Leckview Park on Saturday afternoon.

No real chances were created in a feisty opening to the game before Rovers took the lead on 22 minutes. The impressive Luke Nelis did well beating a couple of men before playing the ball wide to Kevin O’Donnell and he pulled the ball back to BJ Banda and his left foot shot beat Joe Coll low to the bottom corner. Fanad had barely time to recover when Rovers doubled their advantage on 27 minutes. Again it was Nelis who was the catalyst. Nelis went on another mazy run before being brought down by Ronan Sweeney who received a yellow card for his indiscretion. Veteran Anthony Gorman stood up and drilled a trademark free which beat Joe Coll with the aid of a deflection. Fanad never really threatened with a couple of efforts from Jaydee Alawiye going high over the bar and not troubling home netminder Christopher O’Donnell. Any hopes Fanad had of fashioning a comeback were dealt a major blow just before halftime. Another Gorman free kick could only be parried out by Fanad keeper Coll and the ball fell to the inrushing Kieran Doherty who finished with aplomb high in to the roof of the net to loud cheers from the home faithful.

Fanad however got a lifeline straight after the break. A speculative long ball from Coll found Adam Serrinha and he ran into the box and while attempting to round goalkeeper Chris O’Donnell was brought down. Referee Marty McGarrigle had no hesitation in pointing to the spot. Jaydee Aliwaye stepped up and had no problem hammering home a fine penalty to bring Fanad back into the game. Letterkenny did have chances to extend their lead again with Adrian Delap firing over when well-placed while Dan O’Donnell somehow put the ball wide from close in before they did find the net again on 63 minutes. BJ Banda found himself in a race with Joe Coll a long way out following a long diagonal ball. Banda won the race before finding the net with a super effort from 35 yards. Letterkenny put the icing on the cake on 76 minutes when Odhran McMacken fired high following good work by Jason Doherty. Fanad had a couple of chances for a consolation late on with Declan Sweeney going close with a header just over the bar while Adam Serrinha had an effort just wide

Letterkenny now play Bonagee in the final but are back in action on Tuesday when they could win the League away to Drumkeen.

Drumkeen started this game on a bright note and after 10 minutes a Benny Bonner free kick found the head of G Bonner who found himself unmarked in the 6 yard box to knock the ball home for the opening goal. Bonagee drew level after 26 minutes when some slack marking in the home defence allowed S Murphy to score, Bonagee scored again after 36 minutes again the home defence failed to clear O Barron scoring. Drumkeen drew level on the 40 minutes J Black pass to Peter McName on the left who crossed to Shane Lafferty to leave the teams 2 each at half time. The young home team found Bonagee to strong in the second half and Bonagee went on to score three more to put them in the final of this competition. The club wish Bonagee good luck in the final.

*To be played in Bonagee