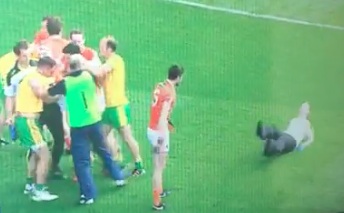 The Donegal doctor who was pushed to the ground during an ugly melee at the weekend’s All-Ireland quarter final says he holds no grudge against the Armagh player who attacked him.

Dr Moran is pushed to the ground by Aaron Findon.

There was outrage when Dr Kevin Moran was pushed to the ground by Armagh player Aaron Findon.

The incident, which resulted in Findon getting a yellow card, sparked outrage and debate on social media.

But generous Dr Moran, who is based at Letterkenny General Hospital said the matter was over as far as he was concerned.

“I have had a message of apology conveyed to me, and I have accepted it.

“I bear the player no ill-will whatsoever. I want that to be the end of the matter and I don’t want to see any sanction against young Findon.

“All I want is for the young man to learn from this experience and that it would not happen again. I wish him well with his career,” said Dr Moran.

The incident was again spoken about on the Sunday Game with Joe Brolly again telling host Des Cahill he was surprised it was brought up again on TV.

The pair had a heated debate the previous day on radio during the game with Brolly saying it was not a big deal.

DONEGAL DOCTOR SAYS HE BEARS NO ILL WILL TO ARMAGH PLAYER WHO ATTACKED HIM was last modified: August 11th, 2014 by Stephen Maguire