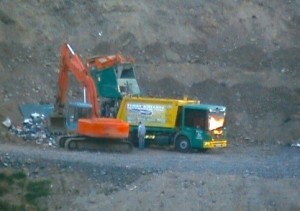 FERRY’S IN BID TO SAVE BUSINESS AS COURT DATE LOOMS

FERRY’S Refuse has won a reprieve in its battle to stay in business – for a month at least.

The company has had its waste collection permit revoked following multiple convictions for illegal dumping.

However the company has been allowed to continue to collect bins in Donegal until September 22 when Ferry’s will argue before a District Court judge in a bid to have the decision overturned.

The National Waste Collection Permit Office (NWCPO) wants Ferry’s banned from waste collection because of its pollution and criminal record.

The office is based in Co Offaly and Ferry’s must travel to Tullamore District Court in a bid to have the NWCPO decision overturned. The organisation will oppose the application.

Jim Ferry, who runs Ferry’s Refuse at Manorcunningham and covers most of the county, was fined €12,000, ordered to pay costs of €30,000 to Donegal County Council and given a six month suspended jail sentence after his latest conviction for illegal dumping in Falcarragh.

The 56-year-old father of six, of Rossbracken, Manorcunningham had contested 12 charges but was found guilty at Letterkenny District Court a trial.

It was his fourth suspended prison sentence for breaches of the law in the past 15 years.

FERRY’S IN BID TO SAVE BUSINESS AS COURT DATE LOOMS was last modified: August 13th, 2014 by John2