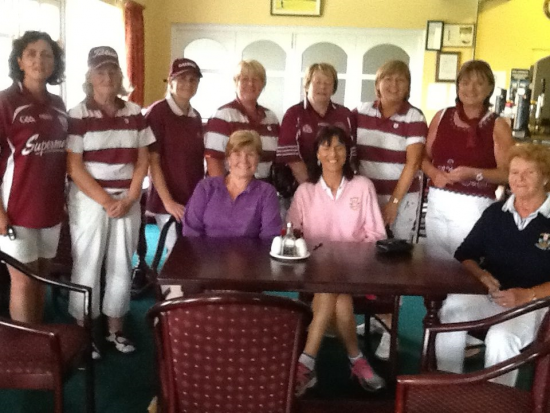 The Ladies Club would like to wish Captain, Catherine- Cooke Harkin a very enjoyable and successful captain’s week. A very popular captain, she is looking forward to a good week, fine weather and lots of golf for the members.

On Saturday, 16th Aug. the ladies play in Day 2 of Captain Catherine’s prize with the aggregate of Day 1 on Tuesday 12thth competition and Day 2 producing the winning score. There are many prizes to be won from the main competition and from the following competitions during Captain’s week.

On Thursday, 14th, there is a step aside scramble with glitz and glamour the theme and beginners are especially invited. Friday is the traditional mixed foursomes. There is also a non qualifiers section, so plenty of golf for all categories.

On Sunday17th and Monday18th, Lady Captain’s prize to the juniors will be played.

Currently, the junior boys and girls are playing their matchplay competitions.

Lady Captain Catherine is also the Junior Convenor and takes this workload in her stride alongside her role as Lady Captain.

She also travelled to Temple Patrick in Belfast on Sunday to support the Junior Team, captained by Marian O’ Sullivan, who was narrowly beaten by Malone Golf Club.

The panel of players were, Tracy Spence, Veronica Mc Ateer, Angela Bradley, Mary Murray, Cynthia Furey and Anne Cannon. They have enjoyed very competitive matches and are to be congratulated on reaching the Ulster semi final of the competition in only their second year of entering. The August Medal winner was Celine Bradley. 72net, Runner Up, Pauline Curley, 74net and 3rd was Tracy Spence, 76net. These medal winners along with next best 7 scores played in Lady Captain’s shoot out last Friday in glorious sunshine. The players and supporters, dressed in Lady Captain’s County Galway colours were an impressive sight on the first fairway. The golf was a very high standard with many ladies needing tie breakers to continue or not to the next hole. The final 4 players of Veronica Mc Ateer, Jackie Ireland, Angela Kilgallen and Sandra McMonagle played great golf but alas there can be only one winner. Angela Kilgallen, who played superbly for 9 Holes, making no mistakes, was faced with a downhill putt on the 12th green to make par. Sandra Mc Monagle, with a drive and a pitching wedge to reach the 12 th green had the comfort of 2 putts to make par, making her the winner in a very friendly and competitive shoot out. No doubt, this will become an annual event in Lady Captain’s week.

Last Thursday, the 18 Hole Club Competition was won by Monica Mc Donagh with 37pts. Two players on the Junior Team played in the final of the Ladies Matchplay last Thursday, Marian O Sullivan and Mary Murray. The match went to the 20th Hole to reach an outcome; again such is the high standard of golf that we have come to expect from Letterkenny Ladies. A birdie putt on the 20th hole secured victory for Marian O Sullivan. Congratulations to both players for reaching the final.

Lady Captain, Catherine would like to wish the ladies good luck for her prize and for the competitions this week and she is looking forward to a great night on Saturday.