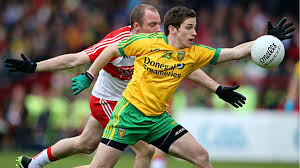 County star Darach O’Connor has expressed his delight with his Leaving Certificate results.

O’Connor picked up his results earlier this morning along with classmates at Scoil Mhuire, Buncrana.

The rising star was delighted with his results and showed he is as talented off the pitch as he is on it.

It’s been a memorable week for O’Connor, who made his first championship appearance at Croke Park for Donegal on Saturday evening.

He was sprung from the bench in the second-half and helped Donegal to a fantastic victory over Armagh.

Donegal selector John Duffy wrote on O’Connor’s Facebook timeline congratulating the young forward, “Congratulations on your results. I heard you did extremely well. A summer to remember!!!

O’Connor can now look forward to Donegal’s All-Ireland semi-final clash with Dublin on August 31st before heading off to college in September.