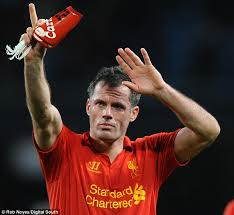 CARRAGHER – “COLEMAN CAN GO ALL THE WAY TO THE TOP, HE’S THE BEST FULL-BACK IN THE PREMIER LEAGUE”

Former Liverpool defender Jamie Carragher believes Seamus Coleman can go all the way to the top, and insists he’s the best right-back in the Premier League.

Carragher joked that he’ll be killed for saying it, but genuinely believes that he’s the best right-back game in the Premier League and has brought his game to a new level.

Carragher said, “I’ll get killed by all Evertonians but I think he can go right to the top, and he’s the best full-back in the league.

“He’s got goals and assists and he’s brought his game onto another level.

“Against Man United at Goodison Park, he was the best player on the pitch.

“They were top expensive internationals on show, and when you think of the money Everton spent on him he is some bargain.

Carragher added that while he felt there wasn’t much competition for Coleman to get on the PFA team of the year, he was the standout full-back in the league.

Coleman has insisted that Everton want to build on last season and said their target is Champions League football.

“We want to play in the Champions League, that’s our target and that’s where we want to be.

“I’d love to win the FA cup too, we’re targeting both and believe their very realistic ambitions.

Coleman is confident he can shake of a hamstring injury ahead of their Premier League opener against Leicester City.

CARRAGHER – “COLEMAN CAN GO ALL THE WAY TO THE TOP, HE’S THE BEST FULL-BACK IN THE PREMIER LEAGUE” was last modified: August 14th, 2014 by Mark Forker