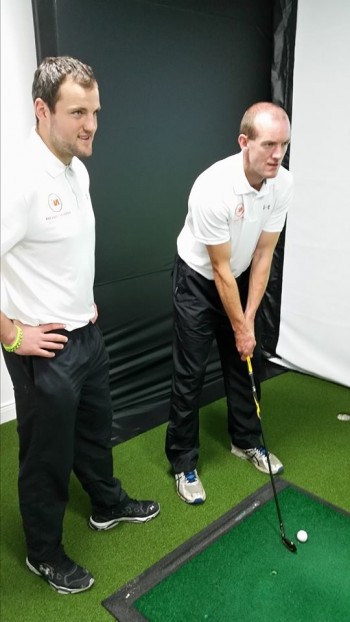 MICHAEL AND NEIL GET INTO SWING OF BUSINESS ON EVE OF BIG OPENING!

Michael and Neil testing out the new state of the art foresight sports golf simulator in-store.

Donegal stars Michael Murphy and Neil Gallagher are certainly ‘getting into the swing of things’ with their new business venture.

The friends and team-mates are today putting the final touches to their first business venture – ‘Michael Murphy Sports and Leisure.’

The Donegal stars will officially open their new store at Station Roundabout in Letterkenny tomorrow (Fri).

Fellow Glenswilly GAA Club member Shane Tinney (son of Paddy Tinney) tries to deal for the best price with Neil Gallagher and Micheal Murphy when he got a pre- opening tour of the new sport shop in Letterkenny today. Photo Cristeph Brian McDaid

But in between stocking the shelves with the latest sports-gear and footwear, the lads took a little time out to test the latest state-of-the-art golf simulator!

The lads say they are delighted to be opening the shop but have insisted their focus is on a certain game against Dublin in just over two weeks time at Croke Park.

The guys say they are hoping for a quiet launch tomorrow.

However, with the amount of goodwill being shown towards these two guys and their team-mates, they might just expect a few customers coming through the doors.

Michael or Neil wouldn’t be drawn on if they plan on stocking Dublin jerseys before the big game.

But rumours that Bernard Brogan is being flown in to perform the official opening has definitely been ruled out!

MICHAEL AND NEIL GET INTO SWING OF BUSINESS ON EVE OF BIG OPENING! was last modified: August 14th, 2014 by Stephen Maguire