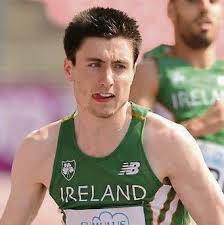 Superb Mark English arrived on the world stage after claiming a brilliant bronze medal in the 800 metres at the European Championships.

The UCD student almost clinched a silver medal but was pipped in the last five metres by the Polish athlete Artur Kuciapski.

His run was just two hundreds of a second outside the all-time Irish record which will surely be in his grasp in the coming months.

English timed his run to perfection and was sitting in fifth with just two hundred metres to go.

“You could sense that if he didn’t go too soon he could hold on. It was absolutely fantastic. We new he had it in him but you still have to go out and do it.

“People don’t understand how difficult it is to get one of these medals. To come out and do what he did was absolutely amazing,” she said.