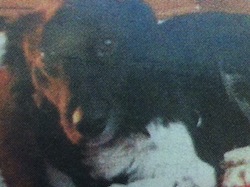 A dog left to die after its owner tied it to a fence with bull wire at a Donegal beach has been rehomed and has helped to save the lives of many other pets.

Primrose as she is today. Pic from ISPCA.

Animal welfare officers were left sickened when the dog was found with the wire embedded in its neck at Erraroey, Falcarragh in January.

The dog was found and the incident reported to the ISPCA who helped get the collie proper treatment and helped to save its life.

The female collie, which was between 2 to 3 years old, was taken to the ISPCA’s National Animal Centre to complete her rehabilitation.

Local ISPCA Inspector Kevin McGinley said at the time “This is a very serious injury but we are confident that she will make a full recovery.”

And now Kevin has been true to his word after the dog was rehomed to a family in Co Meath.

And not only has Primrose, as she has been named, been given a new lease of life but her story has helped saved countless other dogs.

Her new owner Sean Kelly, a farmer from Co Meath, was so happy with his new dog that he has made a €1,000 donation to the ISPCA.

A spokesman for the animal welfare group said the donation will be used to rehome and rehabilitate other dogs who were once in Primrose’s condition.

DOG LEFT WIRED TO FENCE TO DIE HELPS SAVE LIVES OF COUNTLESS OTHER PETS was last modified: August 15th, 2014 by Stephen Maguire