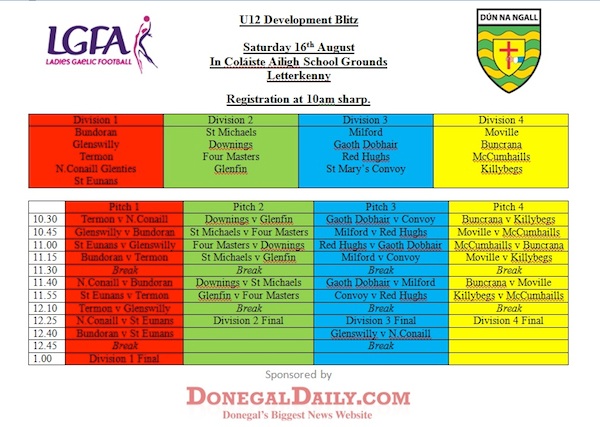 THE next generation of Donegal’s Ladies footballers will take to the magnificent new pitch at the new Coláiste Ailigh in Letterkenny tomorrow (Saturday) for the All County Donegal Daily U12 blitz.

Twenty two teams from all over Donegal will be taking part in the elite blitz which is being used to help identify potential players for a county development team.

Registration is at 10am sharp.

Rules for the U12 Donegal development blitz

• Each team may have a panel of 11. Teams will not be allowed to register more than 11 players.

The official rules of the Ladies Gaelic Football Association will apply to all games however the following exceptions will apply:

• The ball may be carried for four steps before bouncing or soloing—players are restricted to two touches i.e one solo, one bounce or two solos

• Opposing players to be at least 5m from the player taking the free kick, sideline kick or kick out. Free kicks should be no closer than 13m from opposing line. No penalty kicks.

• There are no 45’s, any ball behind the end line is a wide ball and will be a goal kick

** Fair play and fun for all participants. Shouting abuse at player or officials will not be tolerated by the organising committee and offenders will be asked to leave the site!

Here are the fixtures for tomorrow’s games: