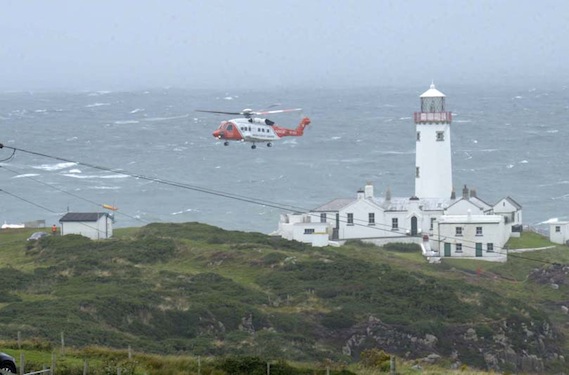 PHOTOGRAPHER DIES AFTER FALLING FROM ROCKS INTO SEA AT FANAD LIGHTHOUSE

The scene at Fanad Lighthouse in north Donegal this afternoon as the Irish Coast Guard Rescue helicopter taking the victim ashore following a search and rescue operation. Photo by John McAteer.

FANAD TRAGEDY UPDATED: A man has died after falling off rocks and into the sea at Fanad Lighthouse.

The man, understood to be from Co Antrim, was taking photographs at the time.

It is believed the man lost his footing and fell into the sea and became trapped in a gulley on the cliffs.

Another person on the scene contact Malin Head Coast Radio station at 2.42pm.

A full rescue mission was launched with two lifeboats from the Lough Swilly RNLI at Buncrana as well as the Mulroy Coastguard and the Rescue 118 helicopter from Sligo were launched.

Two other local fishing boats, the Mary Ellen and the Annie, who were also in the area, also rushed to the scene.

The rescue boats cold not get to the casualty because of a Force 7-8 gale blowing north-westerly towards the shore.

The Mulroy Coastguard boat eventually managed to extract the casualty and took him to shore where the Rescue 118 chopper took him to Letterkenny General Hospital.

CPR was performed at the scene.

However the man, who is in his 60s, was pronounced dead a short time later at the hospital.

A spokesman for Malin Head Radio coastguard said conditions were very bad at the time of the incident which heavy seas and gale force winds.

A spokesman appealed to people to take extra care when walking or exploring the coastline.

Fanad Lighthouse is one of a number of lighthouses around the country which has received a renovation and development grant and is due to open to the public next year.

PHOTOGRAPHER DIES AFTER FALLING FROM ROCKS INTO SEA AT FANAD LIGHTHOUSE was last modified: August 17th, 2014 by Stephen Maguire