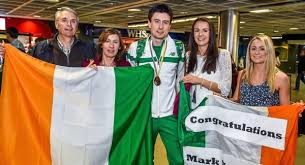 A huge crowd is expected in Letterkenny tonight as brilliant bronze medalist Mark English makes a heroic return to Donegal.

Letterkenny AC have organised the event in recognition of the stunning achievements of English in Zurich.

On Friday evening, the UCD student became the first Donegal man ever to secure a track medal at a major championship.

He delivered a stunning run to capture the Bronze medal and narrowly missed out on Silver in the final of the 800m.

At 21, English is being tipped for even greater success in the future, with many athletic commentators seeing him as a genuine medal hope for Ireland at the next Olympics in Rio in two years time.

Organisers have asked those planning to attend the event to make their way to the Market Square early, as a large crowd is expected to come out and show their support for English.