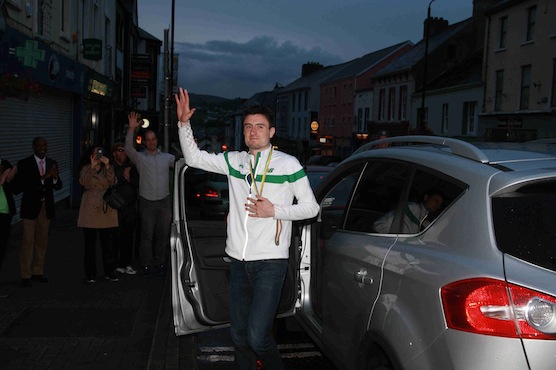 Mark English arrives back in Letterkenny to a huge welcome this evening. Picture by Brian McDaid of Cristeph Studio.

A large crowd braved the wind and the rain to give a real Donegal welcome home to athletics hero Mark English this evening.

The 21 year old Letterkenny man stood proudly at the top of Market Square where he showed off his brilliant bronze medal from the 800 metres at the European Championships.

Mark was proudly surrounded by the many people who have helped him to achieve his goal after arriving on the world athletics stage during his amazing performance in Zurich.

The modest medical student generously posed for pictures with young and old alike – a routine he may well have to get used to.

Mark was welcomed back to his hometown by Town Manager Dessie Larkin.

Among the many faces in the crowd were Mark’s former coach Theresa McDaid, Olympian Danny McDaid as well as Neil Martin and many fellow clubmates from Letterkenny AC.

Councillor Michael McBride told the large crowd that he was sure Mark will now have to get used to such occasions as his career begins to unfold.

Mark thanked all those who turned up on the night and paid a special tribute to Letterkenny AC and to his former coach Theresa McDaid.

The skies may have been dark over Letterkenny for English’s return home.

But it would seem there could well be many bright days ahead for this young Donegal man!

Mark is interviewed by Charlie Collins of Donegal TV. Pic by Brian McDaid of Cristeph Studio.

Mark knows all the people of Donegal are behind him! Pic by Brian McDaid.

What a brolly good show for the Letterkenny runner. Pic by Brian McDaid.

NOT EVEN THE RAIN CAN DAMPEN A BRILLIANT WELCOME HOME FOR MEDAL HERO MARK was last modified: August 19th, 2014 by Stephen Maguire