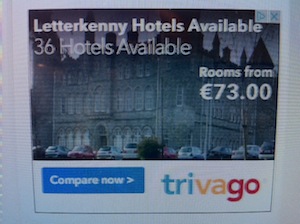 One of the world’s biggest hotel websites has mixed up its rooms with its classrooms for Co Donegal.

The advert for Letterkenny hotels which pictures St Eunans College!

Trivago is a hotel website which receives more than 45 million users each month.

It compares prices for more than 730,700 hotels from more than 200 booking sites including booking.com and Expedia.

But an advertisement for Letterkenny hotels has mistakenly shown a picture of St Eunans College, the biggest boys’ secondary school in the town.

The advert boasts that it has rates for 36 hotels in the Letterkenny area with rooms from €73.

Readers are then allowed to compare the prices and guides for the various local hotels.

Not surprisingly, St Eunans College is not included on the list of hotels despite its castle-like appearance from the outside.

The closest the school came to being a hotel was when it catered for boarders at least three decades ago.