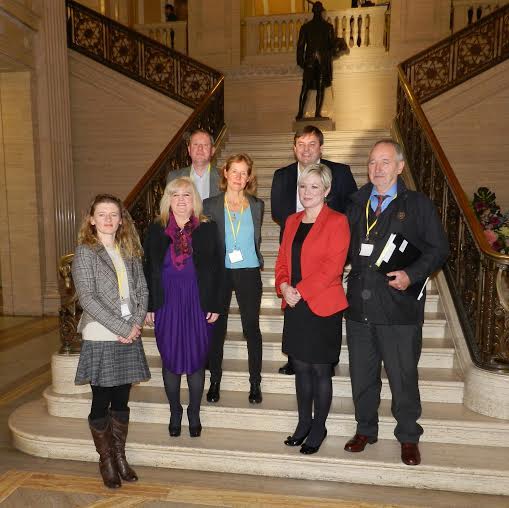 A delegation of environmental campaigners led by Enda Craig, spokesperson for the Community For a Clean Estuary (CFCE) have met with the Northern Minister for Agriculture and Rural Development, Michelle O’ Neill and with members of the Environment Committee in the Assembly to outline their concerns about the impact on the Foyle estuary from the proposed sewerage treatment plant at Carnagarve between Moville and Greencastle.

Enda Craig outlined the history of the Moville/ Greencastle sewerage scheme and the concerns of the community at Carnagarve and surrounding town-lands.

Dr Dubsky and Dr Murphy outlined the unique potential of the wetland eco system in the Foyle estuary from natural oysters and other shellfish to recently discovered sea grass.

They requested that the Northern Executive work with the Irish Government to develop the estuary into a international Ramsar special area of conservation and explained that the immense potential of all of this could be seriously undermined if Donegal County Council proceed with their plans for the plant at Carnagarve.

Speaking afterwards, Enda Craig said: “We brought the campaign to protect the Foyle estuary to politicians in Stormont today because they have a shared responsibility with the Irish government to protect this vital resource. It was clear that the Minister and the other Assembly members we met were moved by our presentations and they have assured us that they will pursue these matters with their southern counterparts.

“There is no doubt that the appropriate location for the outflow pipe of a future sewerage scheme for Moville and Greencastle is out into coastal waters and not into the Foyle estuary. In recent months, we have taken our campaign to Europe supported by MEPs Marian Harkin and Martina Anderson and now to Stormont and we have had the Joint First Minister, Martin McGuinness out to see for himself the issues at Carnagarve beach.

“We will keep fighting because the cost of defeat is too high for all of our communities that live beside Lough Foyle”.

Deputy Mac Lochlainn said: “Minister O’ Neill was clearly impressed by the strength of the arguments from this eminent delegation of environmental campaigners. The history of the Moville and Greencastle sewerage scheme is one of shameful failure. Rather than develop the wonderful amenity of the Foyle estuary, Donegal County Council has given into political tomfoolery and failed everyone in the area.

“I hope that in the absence of leadership at council level in Donegal or from the Irish government that both Europe and the Northern Assembly can now pursue this matter so that common sense is restored at last.”