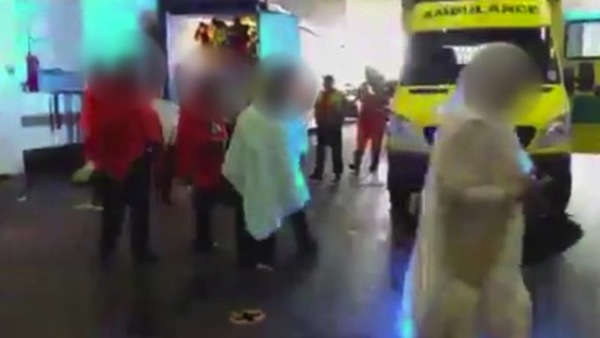 MAN ARRESTED IN CONNECTION WITH CONTAINER DEATH IS FROM DONEGAL

The people who were found in the container at Tilbury docks.

BREAKING NEWS: A man arrested on suspicion of manslaughter in connection with the death of a man inside a shipping container in Essex is originally from Co Donegal, we can reveal.

The 34 year old, who is from Inishowen, was arrested by the PSNI on suspicion of facilitating illegal entry into the UK.

In follows an incident in which 35 people from Afghanistan, including 15 children, found at Tilbury Docks on Saturday.

The Norstream container ship on which the people were carried.

One man was found dead in the container.

We spoke to a number of people from the Inishowen town where the man is originally from who expressed shock at the news.

The man at the centre of the probe still has relatives living in the Inishowen Peninsula.

He is due to be transported to Essex for questioning later.

The group arrived in the UK on Saturday on a ship from Belgium and were said by police to be victims of people trafficking.

They were discovered after dock workers heard banging and screaming coming from one of the containers.

The 34 survivors include 10 men, nine women and 15 children, with their ages ranging from one to 72.

They are all in the care of the Home Office after being questioned by police and are seeking asylum in the UK.

A police spokesman said the man was arrested on the A1 at Banbridge in County Down.

The PSNI are carrying out a search of his home, near Derry, he said.

Acting Det Ch Insp Martin Pasmore, of Essex Police, said: “This is a fast-moving investigation which has already involved a number of police forces and law enforcement agencies from across the United Kingdom and Europe.

“I am very grateful to officers from the PSNI for their assistance this morning. We will continue to work closely with all of our policing colleagues as we pursue our investigation to bring those responsible for this crime to justice.”

It is believed the migrants were in the container for about 18 hours.

MAN ARRESTED IN CONNECTION WITH CONTAINER DEATH IS FROM DONEGAL was last modified: August 20th, 2014 by Stephen Maguire