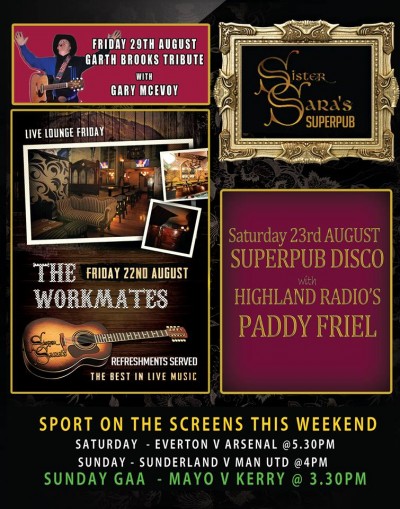 Sister Sara’s has re-established its position as one of the best pubs in Donegal, since re-opening earlier this month under new management.

Since it re-opened, Sister Sara’s has consistently provided top class entertainment every weekend for it’s loyal band of customers.

Next weekend promises to be the best one yet, on Friday August 29th the much revered Garth Brooks tribute act Gary McEvoy takes to the stage.

This weekend, The Workmates will perform in the live lounge on Friday night, and a large crowd is expected to attend both gigs.

On Saturday, you can watch Arsenal and Everton and afterwards there will be a super-pub disco to get you in the party mood.

Highland Radio’s Paddy Friel will be spinning the discs and will play all your favourites.

On Sunday watch the All-Ireland semi-final between Kerry and Mayo, and the Premier League clash between Manchester United and Sunderland on one of our many top quality HD Plasma TV’s.