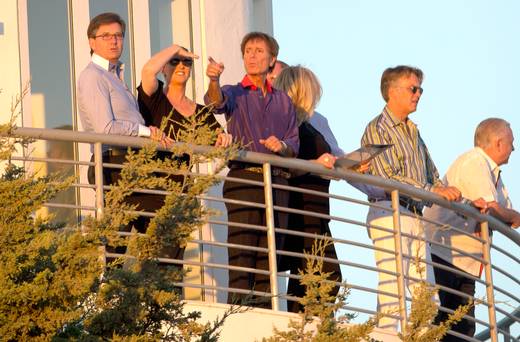 DANIEL AND MAJELLA IN PORTUGAL TO SUPPORT CLIFF RICHARD

Daniel and Majella tonight in Portugal with Sir Cliff

THEY’VE both faced criticism for their stance, but tonight Daniel O’Donnell and his wife Majella are in Portugal staying with Cliff Richard.

Richard together with companion John McEllyn and several friends, including Daniel O’Donnell enjoy the sunset and a bottle of Bollinger champagne from the balcony of the pizzeria Bellavita on the coast of Portugal.

Richard has emphatically denied an alleged historic child abuse incident going back to 1985. His home in England has been searched.

Both Daniel and Majella have publicly backed the singer, expressing anger at how a BBC news crew had filmed the house search.

They have been criticised by survivors of sexual abuse who say they should have waited until police investigations were complete.

Now they have gone one step further in their support – flying to Sir Cliff’s villa to see him.

DANIEL AND MAJELLA IN PORTUGAL TO SUPPORT CLIFF RICHARD was last modified: August 27th, 2014 by John2