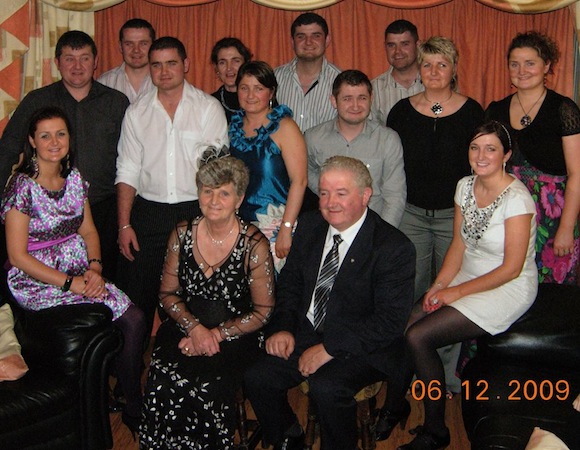 FAMILY’S AMAZING REUNION TO CLIMB ERRIGAL IN HONOUR OF MUM

The twelve Boyle brothers and sister along with mum Ethna and dad Seamus.

A Donegal family are coming together for the first time in years and will climb Errigal for their loving mother.

The twelve brothers and sisters of the Boyle family from Errity, Manorcunningham rarely  get to see eachother.

But the six brothers and six sisters will come together this weekend to climb the iconic Donegal mountain in aid of the Donegal Alzheimer’s Association.

The family’s mum Ethna suffers from the condition and the family wanted raise awareness of the group and raise some money in the process.

Now two brothers are coming from England and another two from Scotland for the very special charity fundraiser.

Daughter Joan said she hoped her mum will be proud of their efforts.

“Mum has suffered from Alzheimers for at least the last four years and we have seen first-hand the great work the Donegal Alzheimers Association do.

“Mum was so good to us and it wasn’t easy raising such a large family but she did a wonderful job and we are so thankful to her for everything we have.

“We were looking for something to do to raise money and I was going to have my head shaved but I have a wedding in December! Another brother suggested we all climb Errigal and that’s what we’re going to do,” revealed Joan.

The family have decided that just the twelve siblings will climb Errigal leaving the foot of the mountain at 12 noon this Saturday.

Joan added “We are a close family but we haven’t been alone, the twelve of us, for more than two years so it will be very special.

“Plenty of the nieces and nephews wanted to come along but we thought it would be nice if we just did it together as a family,” she said.

If you would like to donate anything from a euro to a hundred euro then simply log onto www.idonate.ie/errigalclimb

Joan added “Hopefully we’ll back before it gets together. Whoever has the longest arm will get a selfie of us all at the top of Errigal.”