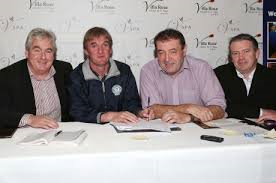 John Campbell has pleaded to soccer fans in Donegal to come out and support Finn Harps as they face a challenging chapter financially in their season.

Finn Harps secretary John Campbell has issued a plea to soccer fans all over Donegal to come out and support Finn Harps as they embark on the final chapter of their season.

Harps have been handed an exciting opportunity to progress to the semi-finals of the FAI Ford Cup after they defeated Wexford Youths on Friday evening.

Harps were drawn to face non-league opposition in the last eight of the most prestigious cup competition in Irish soccer.

Ollie Horgan’s side will face either Avondale or St.Michael’s away from home in the next round, while the draw offers a great chance to progress, the trip logistically and financially is a nightmare for Harps.

Harps face Cobh Ramblers in Cork the week before they travel again to either Cork or to Tipperary the following week.

After the FAI cup match, Harps then face another away trip this time to Terryland Park, in Galway.

With no home matches in three weeks to provide income, Harps will pay out in excess of €10,000 on the away matches.

“The FAI cup draw offers Harps a exciting opportunity in the competition, but there a few things that people should be aware of to keep it in perspective.

We’ll face either the current Junior or Intermediate cup champions, and an away tie will be an extremely difficult fixture, however it does represent an exciting opportunity for the club.

“But I’d ask all soccer supporters in Donegal, and the sporting public in general to ask themselves how they can help the club.

“Inside a fortnight, we face away trips to Cobh in the league, possibly Cork again or Tipperary in the FAI cup and then Galway in the league.

“As people  can see that it is going to be a extremely expensive period for the team with outgoings of well over €10,000 and NO home matches to generate income.

“We need YOUR support, we NEED your financial help, just as the Donegal Senior County Team do to maintain their fantastic challenge for the All-Ireland title.

“So I’m asking people to reflect on the above and I’m asking both individuals and local businesses to support Ollie and the team financially.

“You can start supporting the club by coming along to the league fixture between Finn Harps and Shamrock Rovers B this Friday at Finn Park, 8pm Kick-off.

FINN HARPS OFFICIAL PLEADS WITH SOCCER FANS IN DONEGAL TO COME OUT AND SUPPORT THE CLUB was last modified: August 27th, 2014 by Mark Forker