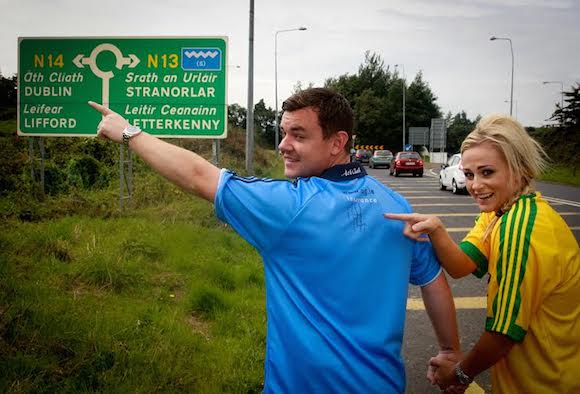 He’s a Dub in Donegal – and the only Dub in the village of Manorcunningham.

But to be fair actor Danny O’Carroll, ‘Buster’ in Mrs Brown’s Boys, says a part of him will be very happy if Donegal do beat Dublin at Croke Park on Sunday.

Not least because his wife Amanda, who plays ‘Betty Brown’ in the comedy series, is a good Donegal woman.

Both got new jerseys in time for the big clash on Sunday; and both will be heading to The Orchard Bar in Letterkenny to soak up the atmosphere.

Just to make sure that Danny gets some protection however there is a very special signature on the back of his new Dublin top.

And here is Brian McDaid’s picture showing how that happened….Donegal captain Michael Murphy signing his first ever Dublin top at Michael Murphy Sports store in Letterkenny.

Amanda and Danny were in Manorcunningham yesterday showing off their special shirts.

And they popped into the Irish Wheelchair Association’s premises in the village to say a big ‘hello’ to the people there.

Needless to say there was lots of banter and craic.

“But I’m a big fan of Michael Murphy and Donegal; I’d be very happy and proud if they win on Sunday.”

Murphy meanwhile told us he was only too happy to sign Danny’s Dublin jersey.

“That’s definitely a first,” he laughed.

Mum of two Amanda has sports star Murphy’s signature on the back of her jersey.

“I don’t know what all the fuss is about this Dublin team. Donegal are going to beat them. Simple As!” she insisted.

(Note to readers: There are still some Dublin jerseys left at Michael Murphy Sports if you are really really stuck).

Danny O’Carroll and his wife Amanda Woods who will be supporting two different sides in this weekend semi-final between Dublin and Donegal.The couple are pictured at the roundabout near to their home in Co Donegal with Danny supporting the blues and his wife Amanda supporting Donegal as she points out Michael Murphy’s signature on the Dublin shirt. Photo Brian McDaid