‘IT’S A WAR BUT HAVE DUBS STOMACH FOR A FIGHT?’ – CATHAL MacSUIBHNE’S BIG MATCH PREVIEW

So do we have any chance at all? That seems to be the question on most people’s minds this week.

Of course we have a chance, it’s a two horse race and no team is unbeatable. Most importantly for Donegal, the man patrolling the sideline is called Jim McGuinness.

That is the single most important advantage we have going into Sunday.

Dublin are an exceptional side, and having seen them up close quite a few times this year and last, the word I’d use to describe them is frightening. There’s never been a more athletic, more swashbuckling, more ruthless team to play in Croke Park. It will take the mother and father of all efforts to beat them but if any team is capable of accomplishing the feat, it is this Donegal bunch stewarded by the game’s leading coach.

One tactic won’t win the game; a multitude of plans, blueprints and strategies will be needed to stop the juggernaut. Jim will break up the match into 10-15 minute sections as he has done all year and possibly implement different tactics in each.

Will we see a blitzkrieg start a la the final of 2012? At certain stages the handbrake will have to come off and this Dublin rear-guard will be tested – something which hasn’t happened too often so far this season.

On the occasions when Michael Murphy (right) is stationed close to goal, we’re likely to see plenty of high ball rained down on top of him and Rory O’Carroll. In last year’s quarter final, Cork caused Dublin plenty of trouble kicking a series of raking high balls in on top of Brian Hurley and Ciaran Sheehan – not taking their chances cost the Rebels in the end but they did show up a chink in the Dublin armour. As we saw with Kieran Donaghy last Sunday, by and large high ball causes panic amongst any defence.

At other times the green and gold wall will be erected – any number of McGinley’s, Mangan’s, Marlay’s, McGuinness’ and even a Swilly bus could be seen en route to Drumcondra to be planted along our 45m line to weather the Dubs onslaught.

Coaching is about trying to prepare for every eventuality, not leaving things to chance. There’s no point in hoping that Dublin don’t score much – you have to do all in your power to keep their score down. There will be some similarities to the 2011 contest for certain stages of the game but we won’t see the all-out shutout that was attempted then.

In any case, there was such a rawness associated with Donegal back then; the naivety and the embryonic stage of ‘The System’ at that juncture dictated a defensive approach. So while Sunday could be similar, the team is much more refined and knowledgeable and are much more au fait with how they want to play.

We were of course vilified for our tactics that day but with the quality this Dublin team has shown since maybe it doesn’t look quite so apocalyptic now as was made out. The main difference will be that the counter attacking speed that was lacking in that game three years ago will be seen on Sunday.

I vividly remember one move where Kevin Cassidy won the ball and powered up the touchline in front of the Cusack Stand but with no one on his shoulder in support he had to turn back for help. That wasn’t necessarily to do with lack of ambition but more with a lack of pace throughout the team and an inability to implement the system in full.

If the same happens on Sunday, the player in possession will have someone on his shoulder. What really needs to happen is a return to the wave attack of 2012 – three or four men on the shoulder. Whether its possible to do this while also manning the buses is the key question.

Kick outs will be the crucial battle zone – at last week’s preview night in Dublin’s Harcourt Hotel, Jim grinned from ear to ear when a questioner from the floor dared mention the subject and he was rebuffed with a swift ‘I think we’ll move on from that one’! 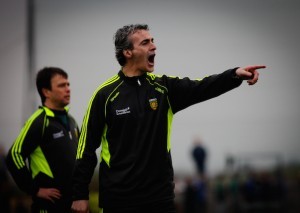 The dilemma to decipher is whether Donegal drop everyone back and concede possession like Monaghan did in the quarter final or do they push up and force Stephen Cluxton to go long and hope that Neil Gallagher, Rory Kavanagh et al can win their share of ball? In the infamous semi-final contest three years ago, it was very much a case of giving Dublin the ball and allowing them free reign to try to break down the mass defensive barricade. This time around it’s likely to be the latter option, the main difference being Dublin’s quickness and acceleration, so even with bodies back they would be expected to find a way through. That said it is a futile exercise trying to second guess McGuinness at this stage so anything and everything is on the table.

His plotting for this game will have reached a crescendo in the last week but this battle has been on his mind for quite a while. As far back as the game with Armagh in the McKenna Cup, when new kick out strategies were unveiled, you can be sure that any new nuance of play has been developed with a joust against the champions in mind. Even the Ulster Final performance this year was probably more defensive that it needed to be but it would have helped in the preparation for Sunday. 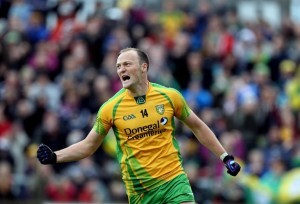 Colm McFadden is one of the key figures in the build up to the game and unfortunately that is because he has not been displaying anything close to his best form of late. It would be a huge surprise not to see him start and despite his poor performances he is still averaging three to four points per game; he’s still contributing and there’s always a chance that he could explode into life.

So, the general consensus is that Donegal are going to have to play astonishingly well to win which is true, however, so is the reverse. In order to beat us, Dublin are going to have to play brilliantly; granted they have done that all year but you’d have to argue that the opposition has been inferior. If they can reach those standards against us and win then fair play to them. If they don’t, we can take advantage.

We have to drag them into a war and see if they have the stomach for a fight.