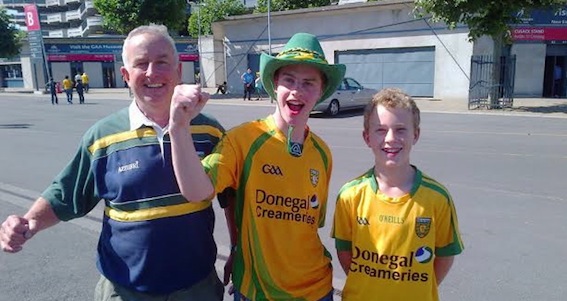 Donegal’s hopes of winning their first ever All Ireland Minor Football title remain very much alive as they lead Dublin by three points at half-time in their semi-final clash at Croke Park.

However, at one stage it looked ominous for Declan Bonner’s side as, after 15 minutes, they trailed by four points on a scoreline of 0–1 to 0-05, the Donegal youngsters recording five wides – their only score coming from a free.

However, John Campbell turned the game Donegal’s way, first finding the net before putting over two excellent points to put his side ahead.

Dublin took the lead as early as the second minute through a Jack Burke  point but Downings’ Lorcan Connor drew Donegal level three minutes later with a free.

A lively Dublin put over four unanswered points before Campbell took the game by the scruff of the neck.

First, he punched the ball to the back of the net after being picked out by McGlenaghan in the 22nd minute.

A minute later, he turned his man brilliantly to put over the bar to draw Donegal level.

He then pounced on a poor kick out by Dublin keeper Whelan to put two between the sides.

A brilliant long distance point from Lorcan Doherty increased the lead to three a minute later.

Saddler pulled a point back for Dublin before McBrearty put over a point t from distance to put three between the sides at half-time.