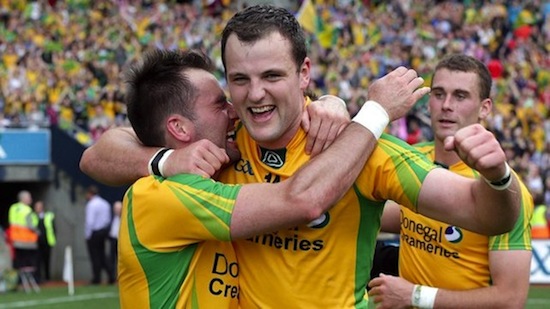 IT’S D-DAY! NOW WE MUST ALL BELIEVE!

It’s a small word but one which Jim McGuinness uses over and over again.

That’s what every man, woman and child in our county must do today as Donegal face Dublin in the All-Ireland semi-final at Croke Park.

If the bookies were to be believed, Michael Murphy and co would be better off staying on the team bus rather than even togging out.

But, as they say in the advert, “up here it’s different.”

For we know the work, the sacrifices, the commitment and the dedication this team have put in.

We know what it’s like to live in isolation and to be the ‘forgotten county.’

Today we have the chance to show the rest of the country once again that Donegal can win against all the odds.

More than 30,000 Donegal fans are set to descend on Croker today and we need our voices to be heard.

We need to let Jim and the boys hear our belief and to let them know that we are 100% behind them.

One word can get us across the line and into the final – believe.

See you all in The Diamond!

IT’S D-DAY! NOW WE MUST ALL BELIEVE! was last modified: August 31st, 2014 by Stephen Maguire