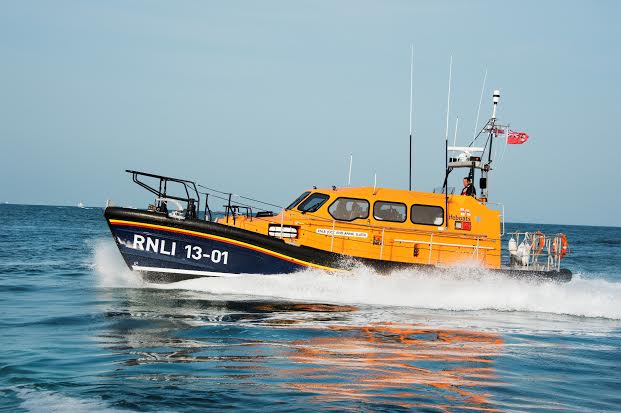 The RNLI has today announced that Lough Swilly lifeboat station in Buncrana is to be the first in Ireland to receive the new Shannon class lifeboat.

The €2.4M lifeboat is the first class of lifeboat to be named after an Irish river, recognition by the charity of the role of Irish lifeboat crews and volunteers throughout the 190 year history of the RNLI.

The new lifeboat is currently under construction in Lymington, England and is expected to arrive on station in Donegal next April.

Lifeboat crew and station management from the Buncrana lifeboat station will next month travel to Lymington to see how their new lifeboat is progressing. It will replace the station’s current all-weather Tyne class lifeboat Robert & Violet and will be the first all weather lifeboat that has been specially commissioned for the lifeboat station, the previous two have come from the RNLI’s relief fleet.

The Shannon is the latest class of all-weather lifeboat to join the RNLI fleet and the first to be propelled by waterjets instead of traditional propellers, making it the most agile and manoeuvrable all-weather lifeboat yet. Waterjets allow the vessel to operate in shallow waters and be intentionally beached. It is 13 metres in length and weighs 18 tonnes.

Its unique hull is designed to minimise slamming of the boat in heavy seas and the shock-absorbing seats further protect the crew from impact when powering through the waves. An improved Systems and Information Management System (SIMS) allows the crew to operate and monitor many of the lifeboat’s functions from the safety of their seats. As with all RNLI all-weather lifeboats, the Shannon is designed to be inherently self-righting, returning to an upright position in the event of capsize.

It will replace the Mersey and Tyne class lifeboats, which are now nearing the end of their operational lives. Once rolled out, the entire all-weather lifeboat fleet will be capable of 25 knots, making the lifesaving service more efficient and effective than ever before.

Lough Swilly’s lifeboats have launched 710 times and saved 47 lives, as well as bringing 517 others safely home, since its establishment in 1988. Of this total 380 of the launches have been to leisure craft, 262 during the hours of darkness and 70 of them in winds of force 8 or above.

The Shannon lifeboat also has a further Irish connection. Peter Eyre, an RNLI Naval Architect from Derry was instrumental in the development of the new lifeboat, designing the hull form at the age of 24 in his spare time. Peter studied at Foyle and Londonderry College before studying Ship Science at the University of Southampton and undertaking a work placement with the RNLI.

Lough Swilly RNLI Lifeboat Operations Manager John McCarter added, ‘This is an historic day for Lough Swilly lifeboat station. We were established as an inshore lifeboat station in 1988 and in 2000 received our first all weather lifeboat. In those years Lough Swilly lifeboats have launched 710 times, sometimes in very challenging conditions, to help those in trouble at sea. The station acknowledges the great financial support it has received from the community and fundraising volunteers of North East Donegal. In addition Donegal County Council and Buncrana Town Council have provided invaluable infrastructural support throughout that time. This new lifeboat, which has been designed with the lifeboat crew in mind and which will make our response times even faster, will be a major advancement in lifesaving on the North West coast.’

RNLI Regional Operations Manager Martyn Smith said, ‘The announcement of the first Shannon class lifeboat in Ireland is a day I have been looking forward to for some time. This lifeboat marks a significant advancement in search and rescue technology and we will be starting a comprehensive training programme for the lifeboat crew from next January before the Shannon’s arrival. The safety and welfare of our volunteer lifeboat crews was a key priority in the development of the new lifeboat class and this particular lifeboat will provide lifesaving cover off the North West coast for decades to come.

“Before the arrival of the lifeboat next April there will be a huge commitment on the part of the lifeboat crew to ensure they are fully trained to operate this lifesaving vessel. I know every lifeboat crew in Ireland wishes the volunteers in Lough Swilly the very best for their new lifeboat.”