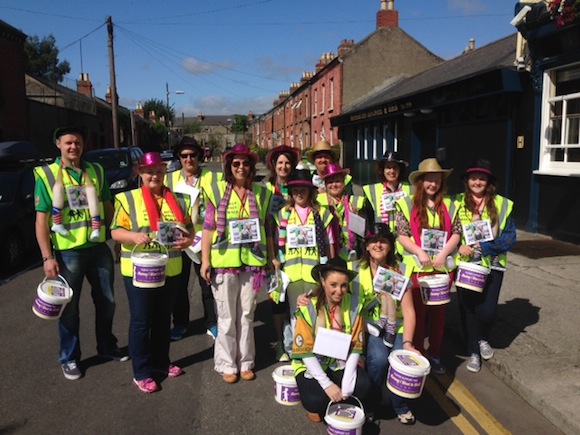 Anne-Marie Doherty and some of her ‘bucket heroes’ outside Croke Park collecting to help Paul walk for the first time.

GAA fans put aside their rivalry to help a young Co Donegal boy walk for the first time – by raising almost €7,000 in just one afternoon!

Young Killygordon boy Paul Doherty needs more than €60,000 to have a private operation in an American clinic.

The five year old has spastic quadriplegic cerebral palsy and dreams of one day getting out of the wheelchair he has used all his young life.

He has had physio, occupational therapy, speech therapy, conductive education, Botox injections, three weeks at the Peto Institute in Hungary and all sorts of medicines but to no avail.

His devoted mum Anne Marie targeted yesterday’s All-Ireland semi-final between Donegal and Dublin and the streets around Croke Park to appeal to the good nature of GAA fans to help with the fund-raising.

And they responded magnificently by filling the buckets of collectors with €6,964.81 on Sunday afternoon.

Delighted Anne-Marie told Donegal Daily her campaign, ‘Mammy I want To Walk’, is well on its way to making her son’s dream a reality.

She said “I cannot believe how decent people have been – both Dublin and Donegal fans.

“The Dubs were filling the buckets and laughing that before the game that they wouldn’t se us again because we wouldn’t be back down for the final.

“When they heard the money was going directly towards helping a little boy to walk, they were just so generous,” she said.

Paul has his operation penciled in for March next in America but his mum will have to pay the cash for the operation in advance.

The operation is called Selective Dorsal Rhizotomy (SDR). And involves cutting some of the nerves in Paul’s spinal cord that are misfiring the muscles in his leg.

Paul has been assessed for this operation and has been accepted. The neurosurgeon, Dr. Park, in St. Louis Hospital, Missouri, expects Paul will be able to walk with the aid of crutches/walker if he gets the operation.

“This operation has been a successful part of cerebral palsy treatment in the USA for years. The NHS in the UK has just recently decided to trial the operation for 120 children there. By the time the operation is available in Ireland it will be too late for Paul.

“We need to raise a minimum of €60,000 for Paul’s dream of walking to be a reality. This would cover the cost of the operation and the first 4-6 months of a two year physio programme which all has to be funded by us privately as there is no HSE funding available for such an intense programme,” added mum Anne-Marie.

And the even better news is that Anne-Marie and her ‘Mammy I Want To Walk’ team have been given permission to carry out a collection for Paul on the day of the All-Ireland Final on September 21st.

“That will be another big day for us and we’re hoping the Donegal fans and the Kerry supporters will give us what they can again to help Paul walk.

“Since people heard of our campaign, they have been offering to hold sorts of little raffles and fundraising nights. It has been amazing.

“Lots of people including St Eunan’s National School in Laghey who gave us €20.10 are helping us in all sorts of ways.

“I know winning GAA matches is a big deal for many people and it’s great to win those games. But I want all the fans to know that they are all winners in my eyes because what they have done for my little boy,” she said.