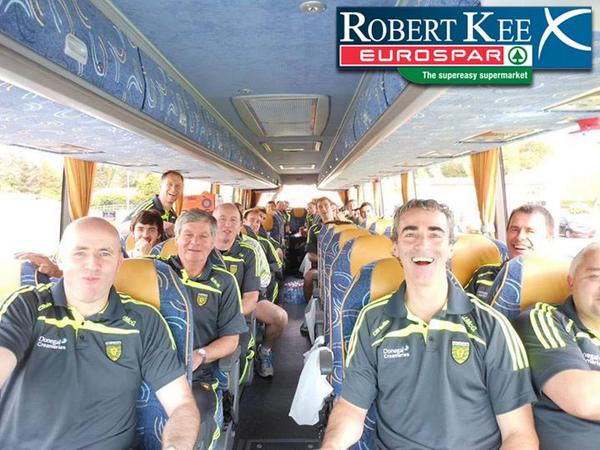 McGUINNESS: ‘IT’S A DREAM TO PLAY KERRY IN THE ALL-IRELAND FINAL’

DONEGAL football boss Jim McGuinness says it’s a “dream” for his side to take on Kerry in the All-Ireland Final.

His side’s incredible six point win over reigning champions Dublin at Croke Park sent shockwaves through football – and the Dublin media who had all but written off Michael Murphy and his teammates.

But Donegal were simply astounding today right through the squad and followed a stunning Minors victory over Dublin to complete the double over the ‘unbeatables’.

“It hasn’t sunk in yet but it’s going to be a lovely journey home. To have the minor and senior team in the final is special moment,” said Jim.

“We know all about Kerry and their tradition and what they’re going to bring and it’s a dream final for us in many respects.

“We’re delighted, we came with a game plan and, in fairness to the lads, they executed it to the letter of the law.

“I’m just very, very proud of them as I have been for the last four years regardless of the result today. Everything you ask of them they give to you.

“We spoke about honesty in the build up and at half time and that’s what we got and they married that with the execution of the game plan so we’re delighted.”

It’s a remarkable turnaround by McGuinness after last year’s defeat to Mayo; lifting another Ulster title and taking this brilliant team of players to a second final in three years.

“There was a lot of soul-searching to be honest with you and it was a tough situation to be in but one thing you can’t fault is these lads’ character and I suppose we had a few very tough and serious meetings at the beginning of the year and the question was asked what do you want to be remembered for’ and I don’t think anyone wants to be remembered for a 16-point loss to Mayo,” said Jim.

“They turned that around very, very well.”

“We’re delighted to be in another final,” said captain Michael Murphy who had an outstanding game, with Karl McHugh the man of the match and Neil Gallagher and Rory Kavanagh outstanding throughout.

“We’ll settle down and start getting ready to go back to Croke Park.”

So will we Michael.

McGUINNESS: ‘IT’S A DREAM TO PLAY KERRY IN THE ALL-IRELAND FINAL’ was last modified: September 1st, 2014 by John2