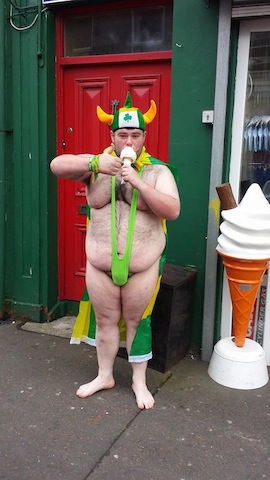 SHAUN IS THE MAN(kini) AS HE DELIVERS ON HIS DONEGAL DARE!

It took a lot for even the biggest of Donegal fans to suggest they would beat Dublin at Croke Park yesterday.

It must have been cold eating that ice-cream Shaun!

One such non-believer was Shaun T Friel from Milford.

Apparently Mr Friel said he would walk down Main Street in the town in a mankini if Jim McGuinness’ side overcame the Dubs.

So you can imagine the cold sweat which broke out across Shaun’s brow (and other places) when the final whistle went on Sunday.

But rather than laugh it off as a bit of banter, Shaun was as good to his word.

He carried out his dare earlier today much to the amusement of bystanders and passing motorists in Milford.

Even the ladies in a local hairdressing salon got more than an eyeful.

But we couldn’t even see the Glenswilly maestro taking on this one.

Fair play to you big Shaun!

SHAUN IS THE MAN(kini) AS HE DELIVERS ON HIS DONEGAL DARE! was last modified: September 1st, 2014 by Stephen Maguire