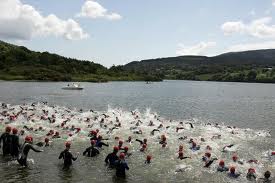 Arguably the performance of the season was the 11th place finish by club junior Christine Russell in the European Junior Cup In Nottingham recently.

Christine was first Irish junior home and she is really performing very well this season and at this rate of progression she will soon be making her senior debut for Ireland.

She had a very impressive time of 1.03.14 which is almost seven minutes quicker than her third place finish in the recent Omagh event.

On Saturday six club members made the long trek to Kenmare in Co.Kerry for the half Ironman National Championship race. Club chairman Gavin Crawford was first club man home, with the best age group performance being Nick Fowell who finished third in his age group in this tough race. Lisa Dalton unfortunately crashed off the bike but is thankfully not seriously hurt. If it was not for bad luck in her last twos races she would have had no luck at all! The event involved a 1900 meter swim 80km cycle and 21km run.

> Locally there were good performances in the Milford 5k. There was a good turn out of club members at the charity Sportive organised on Sunday by club sponsors Mark and Gavin Hunter Of Letterkenny Bikes.

> The next race on the agenda is the Titanic Olympic triathlon in Belfast on Sunday and the club AGM is fixed for the 7th of October.

> There will be a course on triathlons for women only on the 13th and 14th of September In Aura Letterkenny.

> This course held over two mornings will incorporate lectures a track session and a mini triathlon on the Sunday based from the pool in Aura.

> Details are on the triathlon Ireland website and details are also available from Michael@triathlonireland.com and Gavin Crawford at 60crawford@gmail.com or from the