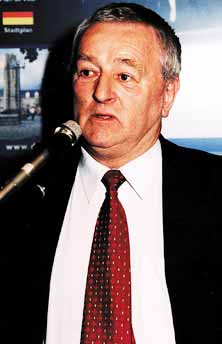 Tributes have been flowing in for one of Donegal’s best-known businessmen, Jim White, who passed away last night.

The well-known hotelier, who was 75, owned a string of hotels including the Abbey and the Central in Donegal Town.

Mr White was also a Fine Gael TD having been first elected to the Dail in 1973.

He was born in the Rock, Ballyshannon where his family had a grocery shop.

His father died when he was just thirteen years old and his mother also passed away just a couple of years later.

Jim said his family’s lifestyle changed dramatically from being comfortable to fighting for every penny.

He went away to England to work in supermarkets there but returned where e set up his own grocery shop.

He decided to stand for election for Fine Gael after his local Fianna Fail rival yet close friend Sean McEniff had set up a supermarket next door to him in Ballyshannon.

Jim served a total of nine years as a TD but went back to his business roots in 1991.

Things went from strength to strength for Jim and he expanded his hotel business.

Many attribute the development of Donegal Town and other areas to Mr White and his drive to make the area a success.

Fine Gael County Councillor Barry O’Neill said Mr. White was “one of his great friends, inspirational to all those he represented,
a great employer and generous to many organisations”.

Cllr. O’Neill said that “It was with great sadness to hear that Jim had passed away last night. I would like to express
my sympathies to the White family at this sad time, I had been to visit Jim in hospital on Thursday evening last and
knew that it would most likely be the last time to see Jim.

“I had the pleasure to work closely with Jim back in 2002
managing his General Election Campaign and later worked as a Marketing Executive at the White Hotel Group
Head Office in Ballyshannon”.

“Jim’s political achievements in the 1970’s and early ’80’s were very significant for both himself and for Fine Gael.
He was first elected in 1973 in the Donegal – Leitrim Constituency, but his greatest day that he always recalled with
pride was topping the poll in the all-county Donegal Constituency in 1977, coming home with almost 11,000 first
preference votes.

“Jim was elected for a third time to Dail Eireann in 1981 in the Donegal South West Constituency
before resigning his seat, Jim concentrated on business from thereon but always stayed involved in politics and
in 1992 and 2002 ran in General Election campaigns” added Cllr. O’Neill.

Cllr. O’Neill said that “Jim was the person who inspired me most to run for politics, following that General Election
bid in 2002, I knew almost straight away myself that I would be contesting the next County Council Elections.

“I had  been given a great insight to the campaigning with Jim and he has always given me great support. Jim was a great
motivator, inspirational and what I liked most about Jim at work in the office was his decisiveness and his ability to
negotiate. In terms of Hotel Tourism particularly in Coach Tours, Jim’s vision and foresight in establishing an
international marketing division in several countries across Europe for the White Hotel Group, proved that he was
ahead of many so-called major hotel companies. He was the best in the business and I remember fondly working
alongside Jim in Glasgow some years ago with a Coach Tour Company and it was unreal watching and learning how
he negotiated for business almost two years ahead of those tours arriving in Ireland”.

Cllr. O’Neill added that “Jim White was a great friend, inspirational to all those he represented, a great employer and
generous to many organisations and charities across the North West. His legacy in political life is still there to see,
his legacy in business is very evident and without doubt he is one of the people responsible for putting County Donegal
on the tourism map. Jim will be sadly missed by his family, friends, staff and indeed by his valued customers, his welcoming presence in the Hotels or indeed at his Head Office in Ballyshannon will be sorely missed, but his contribution to this county  will not be forgotten”.

TRIBUTES FLOW IN AFTER DEATH OF ONE OF DONEGAL’S BEST-KNOWN BUSINESSMEN was last modified: September 3rd, 2014 by Stephen Maguire