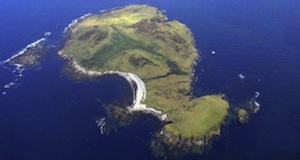 DONEGAL ISLAND COULD BE YOURS AFTER ASKING PRICE IS SLASHED!

An island off the coast of Donegal could be yours after its owner slashed its original asking price.

Inishdooey Island off the coast of Donegal.

Inishdooey had originally a guide price of a cool €1million through German estate agents Vladi.de.

The island, which is 96 acres in size, is part of the Donegal Archipelago which includes Tory.

It lies three miles off the mainland and is owned by Falcarragh man Mark McClafferty, who inherited the property from his late grandfather Vin Duggan.

At the time the owner told Donegal Daily that he considered the asking price to be “a bit steep”.

Before you call your bank manager consider the prohibitive cost of transporting building materials to the island, cautions local contractor Seamus McClafferty, who estimates it will cost between €200,000 and €250,000 to build something modest.

DONEGAL ISLAND COULD BE YOURS AFTER ASKING PRICE IS SLASHED! was last modified: September 4th, 2014 by Stephen Maguire