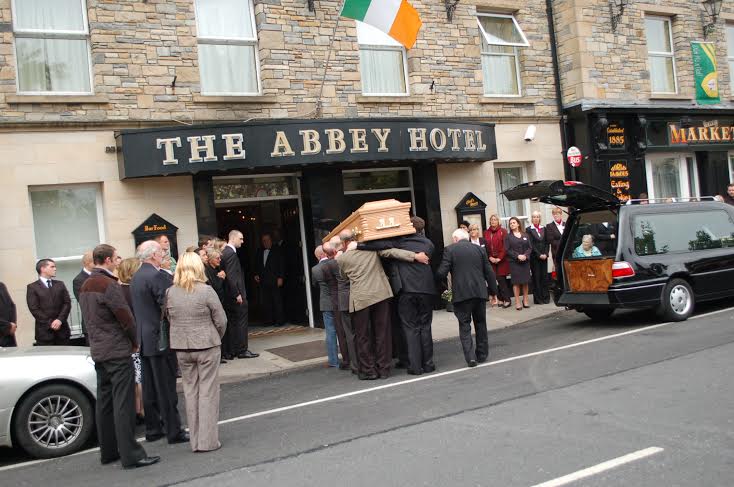 DONEGAL TOWN COMES TO A STANDSTILL AS JIM IS BROUGHT HOME

Jim’s remains are taken into the Abbey for the wake today: Pic Paul O’Sullivan

BY PAUL O’SULLIVAN: Donegal Town came to a standstill atoday as Jim White’s remains came home for the last time.

As a mark of respect for their employer, the entire staff of both the Central and Abbey Hotels formed an impressive Guard of Honour as the hearse arrived on the Diamond preceded by a Garda escort.

He is being waked at his own request in the Abbey Hotel from 1pm today.

Bus Eireann, the Gardai and taxis are to be congratulated for making alternative arrangements to vacate the area for the arrival.

The public are being welcomed to pay their respects to Jim at the hotel.

Removal from the hotel is at 12 noon tomorrow, Friday, to St Anne’s Church, Ballyshannon for funeral service and burial.

DONEGAL TOWN COMES TO A STANDSTILL AS JIM IS BROUGHT HOME was last modified: September 4th, 2014 by John2