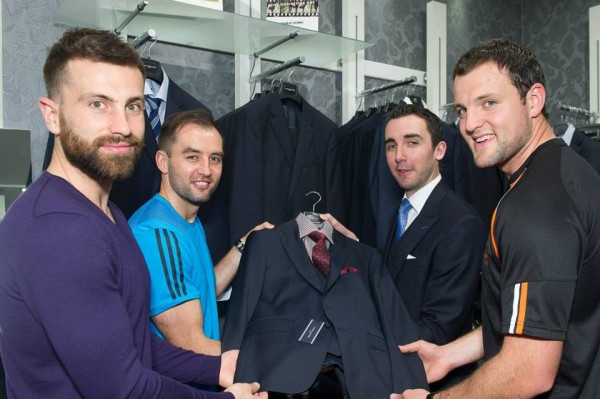 DONEGAL GAA TEAM SET TO ‘EVOLVE’ AHEAD OF ALL-IRELAND FINAL

The Donegal GAA team will be looking dapper when they face Kerry in the All-Ireland final at Croke Park in just over two weeks time.

Staff and players have again chosen Evolve Menswear to make sure they look the part off the pitch as they do on it.

Donegal are in their second All-Ireland final in just three years, and the county is buzzing with excitement and anticipation.

McGuinness is meticulous in his planning, and he knew Evolve Menswear would get all his staff and players all FIFTY of them suited and booted for the big day in Croke Park.

Talking earlier this week, brothers JP and Mark McCloskey said how proud they are to have had the enormous privilege of dressing the All-Ireland Champions in 2012, and now it’s happening again.

They told Donegal Daily, “For us, this is magnificent as we are only open six years and already we have had the enjoyment of fitting out the Senior Team in the All-Ireland success of 2012.

“And this year we get to do it all over again for the Senior team, and with the new addition of the Minor team.

Declan Bonnar’s Minor team have ‘evolved’ this year in serious style and will also be looking dapper as the Evolve Menswear team will be fitting them out.