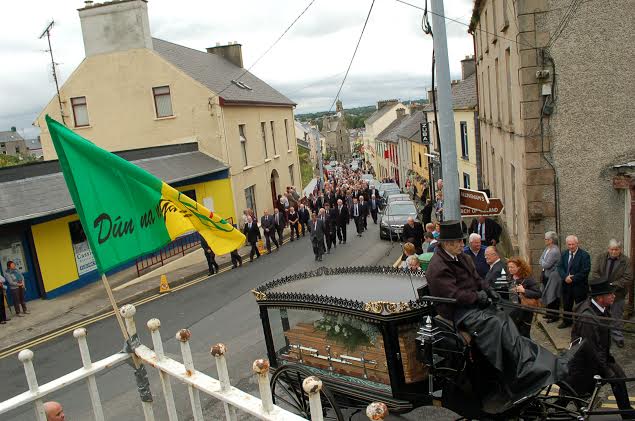 An taoiseach Enda Kenny with Donegal Town Mayor; Patricia Callaghan and husband Vincent at the graveside

Jim White was finally laid to rest in his hometown of Ballyshannon at 3.45pm this afternoon. The owner of 9 hotels often said that “the best house was a full house” and even in death the wiley hotelier managed to pack St Anne’s church with as many outside as in. Graciously posing for a photo prior to entering the church, An taoiseach, Enda Kenny told me that ” Jim White was an extraordinary man of great talent and ambition”.

The people of Donegal Town paid a fitting farewell earlier as crowds lined the cortege route from the Abbey Hotel right around the Diamond and down Quay St.

Kieran Kennedy from the Ardaghey Pipe Band led the cortege. He and his family have a long association with Abbey Hotel ( brother Paul went to work there aged 16 and 30 years later he is still there).

Jim’s remains were waked in the hotel all day Thursday which has seen countless weddings and baptisms over the years. However this was the first wake, completing the circle of life “from the cradle to the grave” Former Manager of the Central Hotel sang one of Jim’s favourite songs “The Old Rugged Cross” as the wake drew to a close at 11pm.

His own people of Ballyshannon turned out in their hundreds as the horse drawn cortege trotted through the streets he grew up in. As the remains were carried into the church, Frank Sinatra’s “My Way” rang out through the PA system.

It summed up perfectly the man’s life whose father died at 14 and his mother two years later. He went on to build an empire that has survived the worst recession this country has ever seen. Always self effacing, he attributed his success to the “dedication, talent and loyalty” of the people around him.

The Abbey Hotel is hosting its’ 20th Country Music Weekend starting tonight (Friday). Jim White left clear instructions for it to go ahead and so it shall. Finally, on Sunday night when Jim was entering the Departure Lounge of this life, one of his children whispered in his ear: “Donegal just trounced the Dubs twice” – a slight smile acknowledging the news.

The Donegal Team have a long association with the Abbey Hotel and as usual they will be “fed and watered” on Sat 20th Sept. before boarding the bus to Dublin.

To a man, they’ll do it for both Jims.