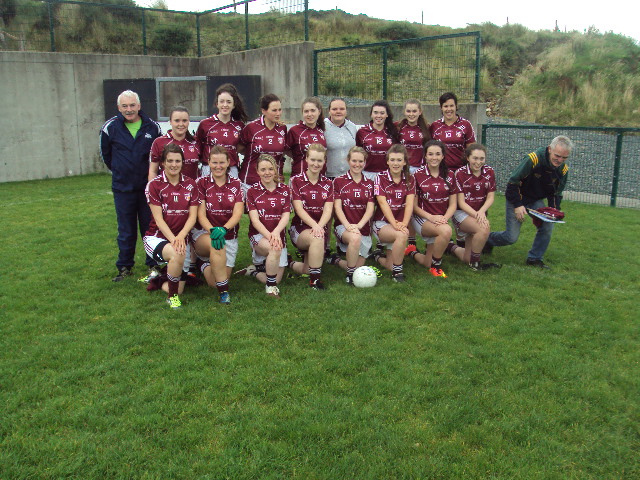 While Termon senior Ladies were on a roll in defeating Glenfin in the Donegal Senior Championship Harry mc Glynns junior team just fell short against Killybegs ay the Burn Road.

Killybegs made the long trek to the Burn Road on Sunday morning to engage Termon in a hard fought Junior league game, and departed with both points in a game that Termon felt they had won.But Killybegs managers Aisling Cunnighan and Sharon White will be happy with the outcome, Termons Hary mC Glynn and Noel Mc Bride will be disappointed with the outcome in a game that had a dramatic ending.

With Referee Gerard Mc Hugh indicating that one minute remained and Termon leading by one point a Termon attack broke down when Mairead Gallagher made an timely intervention.

She offloaded to Catherine White who was lurking on the edge of the Termon square and she made no mistake to send Killlybegs two up in the dying minutes.

This was rough justice on a Termon team that showed spirit and heart led by the experienced Martina Kelly and Caroline Duffy.

Termon who lead at the break by 2–1 to Killybegs 0–5 were good value for this lead as the Kelly sisters were bossing Termon’s rearguard for the first half.

But for most of the second half the bragging rights were equal as the sea siders took hold of proceedings for long periods only to be neutralised by a strong Termon defence .

But while that Catherine White strike won the day for Killybegs the talking point was a wonderful goal by Meabh Mc Daid just after halftime.

Mc Daid collected a pass from Caroline Duffy on her own twenty metre line she ran the length of the field evading several tackles before planting the ball in India Boyle’s net, it must rank as the best goal scored at the Burn Road in 2014 at any level.

While Killybegs were on the back foot at this point County player Aisleen Cunningham and Shauna Boyle were keeping Killybegs in the game and indeed when while Termon only scored two goals and a point in the second half while Killybegs scored 3 –2 in the same period against the wind. This was as a result of some powerfull play by Tara, and Catherine Whyte daughters of former inter County Referee Jimmy.

But Termon manager Harry Mc Glynn can be proud of his team who had great performances from Lisa and Ann Mc Glynn,Sally Mc Fadden and Celine Mc Daid and Aisling Ryan